The Bayonettes – We Light Fires to Watch Things Burn 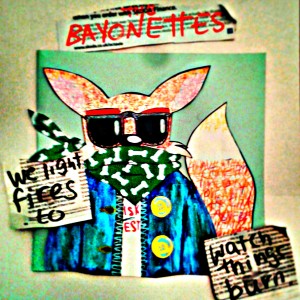 The ambitiously titled We Light Fires To Watch Things Burn is the third EP from North Coast alt-rockers, The Bayonettes. Recorded within the space of a day in Nicholl’s (Daniel, lead vocals/guitar) house, what this EP may initially seem to lack in length is more than compensated for by its actual contents.

Opening with ‘Alternative Party People’, one can immediately discern heavy hints of The Undertones, particularly in its vocals, which can only be described as being distinctly like those of Feargal Sharkey. However, they manage to make this song truly their own, with the steady main riff backed up by roaming bass lines (courtesy of Sam Foote) and determined drumming (from William Keers). A bright, colourful, feel good opener, this could easily double as a stand alone track based on its strength.

Moving onto ‘The Death Of Annie (Creepy Romantic)’- of which I can only say that I sincerely hope is not based on any of The Bayonettes personal escapades- it is a more gritty, nineties style track. Tinged with stoner rock tones and building up to a solo that screams Sonic Youth, this is one for anyone who likes their grunge with a modern twist.

The EP finishes abruptly with the seven and a half minute long ‘Coyote Waters’. Now, would this generally signal a sigh of exasperation and a subsequent facepalm? Absolutely. After actually listening to it from start to finish, does it generate the same reaction? Surprisingly, no. With pared down guitars and almost dulcet vocals, this is a song that really separates itself from the rest.

It is with this EP that The Bayonettes seem to have really come into their own, finally striking a balance between what may previously have been deemed as their “over indulgent” predilection for early alternative and post rock, and their underlying fondness for dreamy acoustics. A real hard hitter, from which each track could easily be acclaimed as a great stand alone release- this is by no means a release to be overlooked.