by Aaron Hamilton
in Music Reviews 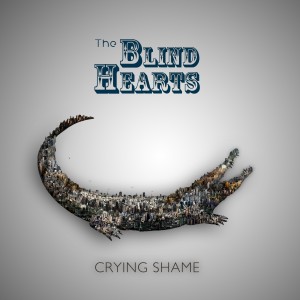 The Blind Hearts are unusual for a London-based band – ignoring their contemporaries and instead taking notes from everyone from The Band to The Charlatans, they peddle an interesting take on the blues, folk and rock, and have won over a lot of gig-goers in the process, having supported the likes of Seasick Steve and The Stranglers in the last few years. Their debut EP Crying Shame is testament to the fact they hold up equally well on record.

First song ‘Crying Shame’ really sums up The Blind Hearts’ style from the get-go. It is a big, toothy grin of an opening, complete with a little touch or organ in the background – this is instantly memorable stuff. Vocalist Andy Gyves really stands out on this track too, flexing his vocal chords over the catchiest song on the EP – it sounds like he is channelling the voice of Shannon Hoon of Blind Melon fame throughout (much to this reviewers glee!) The song provides the ideal opening for the band, and it isn’t often such great production value as this can be heard on a debut.

Lead single ‘(Oh Lord And I) Keep On Losing’ takes the tempo down a notch with more of a focus on Dan Clark’s slide guitar riffs. There is an unmistakable touch of Ryan Adams on this track too. The production on the drums on this track is a little underwhelming, which is unfortunate because J Hirano actually plays some pretty sophisticated rhythm here. That aside, the track is very difficult to deny, with its guitar noodling and lyrics dripping in attitude.

Standing In The Shackles is the real highlight of the EP. It is also the longest track on here, taking its time to show off all its progressions and movements, and this works in their favor. At this point you can already see where each track is going before it even begins, but despite being a bit obvious it has certainly achieved the sound the band were aiming for – and its just about catchy enough to get away with it. Few bands have incorporated this sound and gotten away with it in the last few years (Kings of Leon are the only one coming to mind, actually) but The Blind Hearts pull it off, mostly, with aplomb. On top of this, the four tracks on offer here are all quite distinct from each other – Crying Shame doesn’t feel repetitive or overbearing, but there is a risk of the EP feeling a little disjointed after a few listens.

Last song Before We Fall is probably the weakest moment on the EP – the delicate acoustic finger picking on the track are worn down by the vocals and lead guitar and the whole thing feels a little muddied. I cant help but feel that we had already heard the best of the bluesy swagger on the previous songs, and that this was an opportune song to wind down on. Despite that, it doesn’t drag the whole EP down. It’s far from a bad song and The Blind Hearts have still exhibited a strong, complete piece of music with Crying Shame; a breath of fresh air in today’s often-stagnant rock scene.

◀ STANDOUT ⁞ Standing in the Shackles ▶
◀ SOUNDS LIKE ⁞ Kings of Leon ▶