The Flims – Life Outside The Womb 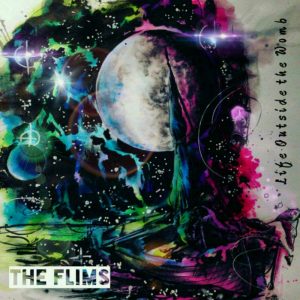 Indie rock can be the most frustrating of genres. The genre’s lasting popularity in the post-Strokes world is undeniable, and with good reason: at their best, the likes of The Libertines and Arctic Monkeys are able to produce a rare exhilaration in their music that few bands can match. Unfortunately, the eminently radio-friendly nature of the genre often leads to bands whose sole purpose is having a hit, often leading to stale, safe sounding music with more focus on following the scene’s rules and aesthetic than creating anything new or exciting. This often extends to our local scene too, so it’s always a relief when a band like The Flims come along, whose raucous debut EP is indie that doesn’t forget about the anarchic power of rock n roll.

‘Life Outside the Womb’ immediately sets itself out as something different, from it’s striking title to the fantastically psychedelic sci-fi moonscape of it’s cover art.  Opening track ‘Mind Games’ explodes out of the tracks with Declan McGoran’s hard-edged, driving riff, before rhythm section Sean Smyth and Matt Crossey kick in to form the song’s remarkably full-frontal assault. McGoran’s punky vocals are perfectly suited to the song, skilfully adjusting to the song’s frantic changes in tempo and pace. The band’s key understanding of quiet-loud dynamics are a highlight throughout, and Crossey’s superb drumming is rightly high up in the mix.

Single ‘Echo Falls’ finds the band in poppier territories, with Smyth’s simple yet ominous bassline prominent throughout the whole song. McGoran’s effects driven guitar licks give the mid-tempo verses of the song a dramatic, gothic feel to preceedings, which are appropriate given the heavy nature of the songs lyrics: McGoran muses on ideas of purpose, faith and the negative effects that religion can have on the world (cleverly adapting the refrain of ‘Killing In The Name’ for a post 9/11 generation). As the song’s rides out with backing ‘oohs’ over McGoran’s existential chorus (Where we going?/ There’s no knowing’), the band sound more assured than a debut single has any right to be.

Rounding off the EP is the six minute workout ‘Dr Afflerbach’. McGoran’s guitar meshes with Smith’s spidery bass line to form the song’s typically anthemic melody, which also exhibits the band’s keenness for At The Drive-In style mid-song tempo changes. The sci-fi tale at the heart of the song (‘There is no return to earth/ The humans are defeated’) bears more than a passing resemblance to The Flight of the Conchord’s ‘The Human’s Are Dead’, but it does provide a fine showcase for McGoran’s falsetto, and the freewheeling nature of the song’s tight funk should provide much cause for robo-boogie when it comes to taking this EP on the road. The track provides further evidence of the band’s ability to produce exhilarating hard rock that can change from a crawl to breakneck speed in an instance.

In conclusion, The Flims have delivered a rip roaring debut EP that rocks without falling into indie lad-rock clichés, both lyrically and sonically. Playing a brand of post hardcore that recalls local legends Jetplane Landing and Fighting With Wire, their spirited attack will be a most welcome addition to the Belfast scene.