The Growlers – Hung At Heart 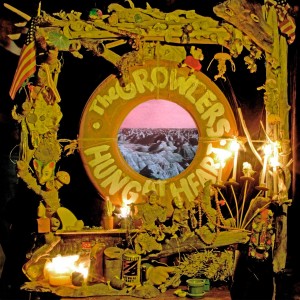 1960’s California, days spent by the beach and house parties by night, and all this accompanied by a musical soundtrack featuring the likes of The Beach Boys, The Byrds and Love. The Growlers, who themselves hail from California, have taken this Bohemian scene and sounds and produced their own soundtrack. It’s a sound that The Growlers themselves have termed “beach goth”.

Hung at Heart has a very laid back, retro approach and a lo-fi sound. Each track has a heady mix of reverb soaked guitar and keyboards blending everything together. Various Californian sounds are heard throughout the album with tracks such as ‘Row’ showcasing some surf rock guitar work while others such as ‘Use Me for Your Eggs’ or ‘Salt on a Slug’ show a psychedelic side to their music. ‘It’s No Use’ sounds like some kind of distant carnival ride. A bit of country and folk finds its way into the music as well, ‘Living in a Memory’ has an acoustic guitar and a distinctive country rhythm.

Lyrically Brooks Nielsen’s lyrics can be a real treat. At times he displays childlike hope and dreaming such as on the opening track ‘Someday’, “when tall boys turn into champagne, when bologna turns into steak”. The stand-out however is the delightful ‘Pet Shop Eyes’. It is playful, it is catchy and one of the best tracks on the album. Nielson tackles love and longing as well as social issues; ‘In Between’ is about finding your niche between the hippies and the squares of the world. Others tackle drug use, something you would imagine the band is familiar with after listening to the chilled psychedelic vibe on the album.

The album’s style is perfectly encapsulated by the penultimate track, ‘Beach Rats’. This is a track wherein the lyrics and the music combine perfectly to produce a mood. It’s a song about “beach rats” and surfers in the sun as well as the dangers of drugs, backed by some reggae-lite guitar with a helping of reverb.

The Growlers is a band that could slot into the music scene of 60s California with ease. Hung at Heart at times suffers from its lo-fi sound with the real variety of sounds masked and blended together behind the production. Still this is a jangly, reverb laden mix of surf, folk and light psychedelia which echoes the lifestyles of the California beach rats.

Widowspeak – Ballad of the Golden Hour