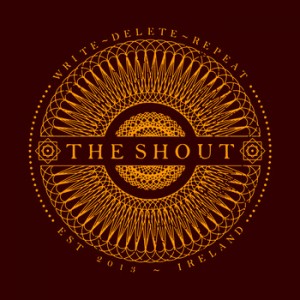 There is a significant buzz building around the subjects of today’s review, Warrenpoint’s own The Shout. The band, who started as a five­piece but have recently been whittled down to a trio (they are looking for a new sticksman, so drummers – get on it!) formed in 2013 and have already hit several impressive milestones. From their debut single ‘On and On’ being played on BBC Introducing, to signing to Animal Farm management, to two successful UK tours, and even securing a place in the finals of our very own Kickstart competition last year, this is clearly a band whose star is rising.

Their debut album WRITE­DELETE­REPEAT was recorded in London under the guidance of Animal Farm last year, and released in October. At just six tracks and under half an hour long it’s hardly an epic, but their sunny brand of pop rock shines from every track in a way that’s really rather delightful. Opening track ‘Wait For Me’ pins their colours to the mast immediately, with jangly guitars and bursting drumbeats, so popular in this ‘radio friendly rock’ type of music. Vocalist/guitarist Colm Cunningham has a lovely voice, mellifluous and earnest and perfectly suited to this style.

The further the album progresses, the clearer the band’s influences become. Thus there are hefty doses of the likes of Paramore, We The Kings and We Are The In Crowd on tracks such as ‘The Runaway’ and ‘Where Do We Go From Here’, as well as dashes of Sum 41­esque pop punk nestled in ‘When We Were Young’ and ‘the enormously catchy ‘The One’. The aforementioned single ‘On and On’ cleverly combines these two genres, resulting in a song that’s polished and glossy yet stills retains a strong element of rock.

It’s the final two numbers that best display the band’s range. ‘The Runaway’ is the fastest and certainly the ‘rockiest’ song on the album – there’s a fair dose of of heavy here, particularly in the instrumental break and outro. In sharp contrast is final track ‘Where Do We Go From Here’: the ballad. It’s a lush and beautiful number, with mature lyrics and and a haunting, melancholy air. That these two songs can be so disparate and yet remain recognisably The Shout is testament to the band’s vision (as well as the guiding hand of Animal Farm, no doubt). This is a terrific debut from a young band who already know who they are and what they want to sound like. The production is flawless, resulting in a clear, full sound that displays the band’s talents perfectly. In fact, The Shout have the potential, image and management that could see them go far – don’t be surprised if you spot them on Kerrang! TV or the like in the very near future.