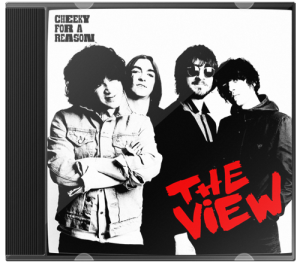 The mid Noughties, a time when society deemed it once again acceptably cool for men to sport skinny jeans, grow their hair array and form indie pop bands with melodic one liners. Amongst this breed of winkle picker lovers were The Enemy, The Klaxons, One Night Only, The Kooks (really, we could be here for a while) and, perhaps one of the more successful of the bunch, The View. These guys were the kings of catchy chorus’ and oozed enough teenage rebellion to give them that slight edge they may have needed.

The Dundee four piece came to critical acclaim back in 2007 when their debut album ‘Hats off to the buskers’ flew to number one in the charts, gaining them recognisable success, and a spot at most U.K festivals. Unfortunately for them though, like everything, the craze died and seemingly so did their success.

After the flop of two follow up albums, these guys are back with ‘Cheeky for a reason’ and a new label, Cooking Vinyl, that is renowned for rescuing fading artists. Can it prove that these guys have more than good timing and the ability to drill a song so hard into your head that you will be singing it in your sleep?

Perhaps had The View bounced back after their debut with this record we wouldn’t be trying to remember exactly which ones were they (the ones who wore the jeans for a notable couple of days- in case you were wondering). The opener of this 13 track, indie pop filled album has an instant likability and with little wonder ‘How Long’ is also the first single. The song has barely started before it hits the first chorus and the momentum doesn’t let up throughout. Front man, Kyle Falconer’s, vocals are as sand papery as ever and are wrapped around steady-rolling-drums and Brit-pop-esque guitar.

The up-beat pace is carried on in the next few tracks but it also appears that they may have set the bar a little high for themselves with track number one. ‘Anfield Row’ keeps the attention from wondering completely – the obligatory ode to the home town- with a slight 60’s vibe, guitar lines leading the way into a melodic chorus, as with most of their stuff, old and new.

The record turns to a subtle country twist, imagine if John Wayne had ever met The Proclaimers, but ‘Bullet’ is actually a cracking tune and could easily be a festival winner with its layered, crowd-chanting harmonies.

It appears that these Dundonians have evolved in their song writing, there is definitely a more mature feel all round and proof of an emotive side. Could this be the result of having gained a helping hand from Kings Of Leon’s unofficial fifth member Leon Angelo Petraglia, or could it be a case of they have just grown up a bit, they were only wee lads the first time round after all.

The record has a few low points in ‘Bunker (Solid ground)’ and ‘Hole in the Bed’, the latter baring a massive reminder of why these guys were branded The LiberTeens in their ‘Wasted little DJ’ days. Though, there are points in this record that bares more resemblance to McFly than Pete Doherty, cheeky indeed.

Falconer shows off that his vocals can be more than just a thick Scottish accent with some gentler moments, namely in Tacky Tattoo which is a welcomed change in pace for them, hard pop guitar is swapped for electronic piano and laced with regretful lyrics that almost tug at the heart strings.

While there is nothing massively original in number four, it is actually a half decent indie-pop album, punchy and fun, and it is definitely some of their best work. I can’t help but feel that, although it has been a somewhat redeemable album, it may not be enough to catapult them back into the spotlight. It would seem everything has a time and a place, perhaps pop culture now has a different View.

◀ STANDOUT ⁞ Bullet ▶
◀ SOUNDS LIKE ⁞ The Libertines | The Kooks ▶

The Kooks Get Set For Féile an Phobail