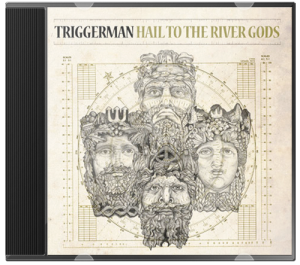 Triggerman are celebrating their tenth anniversary this year, and have gained some pretty good support slots with the likes of Sepultura, The Undertones and Orange Goblin. Their recent headliner in the Limelight with Slomatics and Hornets reinforced their standing as a popular draw on the local circuit.

The likes of Classic Rock and Metal Hammer have been heaping praise on the band, meaning that ‘Hail to the River Gods’ is going to be an album burdened with major expectations. ‘Rage of the Goddess’ begins with a nice bit of drum work, while Bap asks “well, well, well/What have we got here/that couldn’t be described/even by Shakespeare?” The riffing is groovy, but it is pure Clutch (a Triggerman trademark) with a hint of Orange Goblin as well.

‘Rise of the Woodsman’ is a much more up tempo track but the description I’ve given of the previous track pretty much matches this one as well. And it carries on until we reach the last track ‘Blind Side of the Moon.’ A more reflective piece with some very bluesy licks, it highlights the strength of the band’s musical muscle and conjures up an image of a barfly entertaining you with a jukebox playing in the background. Hands down, the best track on the album.

Bap’s skill as a lyricist is on display throughout the album. At times, his wordplay and vocal delivery can leave you surprised (although alternating between a Derry and American accent grates very quickly). You end up wishing that he would do something that would place much more emphasis on his lyrics instead of soaring over riffs that just make you think of Clutch.

The production and playing cannot be faulted on a technical level. It’s obvious that Triggerman are a tight, well rehearsed unit who love what they are doing and will do it until they cannot anymore. I just wish they’d display a bit more imagination.

It’s a solid underground album for beer drinkers and hell raisers. It’s hard to actively dislike it as it’s certainly by no means poor but it’s far too comfortable and derivative.

◀ STANDOUT ⁞ Blind Side of the Moon ▶
◀ SOUNDS LIKE ⁞ Clutch ▶