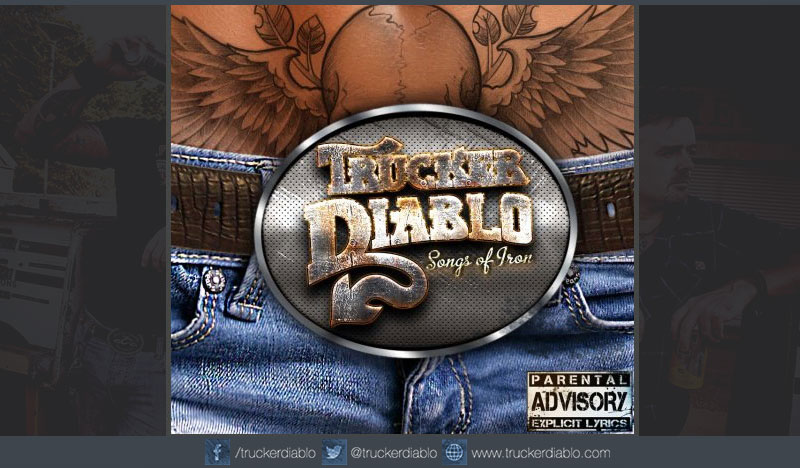 Trucker Diablo are not just one of this country’s finest Rock bands, they are also one of the most hard-working and most savvy about the machinations of the music world at their level. Of course, every band aspires to get to the next level and all the way to the top, but the trick is to survive the journey itself, make money from your music, climb the ladder as far as you can and, most important of all, enjoy the ride. The Trucker Diablo lads seem to have a handle on all of this, especially the ‘enjoy the ride’ part. What’s more they have managed to create a band brand. ‘Brand’ may be a dirty word among the Rock fraternity who view it as something Simon Cowell has polluted the airwaves with, but it is essential to any band looking to make their way, not just boy bands and their ilk. Trucker Diablo have the logo which looks great on their merchandise, they have the nickname ‘The Big Truck’, they have their straight-ahead Heavy Rock sound and a whole ethos of ‘we’re in this together with our fans’. This latter aspect was shown by the pledges they received from their fans to help fund the recording of this their second album, and whose pictures adorn the inside of the CD booklet. Many bands try this ‘crowd funding’ malarky, few actually make it work.
ADVERTISEMENT

That so many were willing to put their hand in their pocket to help fund a second Trucker album is testament to their excellent debut album, ‘Devil’s Rhythm’. But of course, the cliche of the ‘difficult second album’ has more than a ring of truth about it and there must’ve been more than a little pressure on the lads from Lurgan as they set about writing and recording ‘Songs of Iron’. Thankfully, for all concerned it has been money well spent and I have little doubt that ‘Songs of Iron’ will consolidate the band’s status further and hopefully move it up a notch or two.

‘Songs of Iron’ does exactly what it says on the tin; an album chock full of hard ‘n’ heavy riff-based songs, typified by the album opener ‘Red Light On’. Here’s the ‘Trucker formula’ as demonstrated by it:- Find a good crunching riff, add a fantastically tight, hard-hitting rhythm section for momentum, spread on some down-to-earth, no-frills vocals and top it all off with a chorus the boys down the front can pump their fists to. Sounds simple enough but few bands can really master it. However, Trucker Diablo do it well and what we have here is an entire album of songs that makes you want to drive around with the windows down and the stereo pumping at top whack.

It only takes a couple of listens before songs like ‘Year of the Truck’, ‘The Rebel’ and ‘Not So Superstar’ are well and truly in the ol’ memory banks and you’re ready to sing along when you next catch the band live. The latter features a ‘f**k the rules’ refrain which I would say will make it a firm live favourite. But Trucker Diablo are not a one-trick pony. They may have a basic formula but it doesn’t mean each song sounds the same and makes repeated listens stretch the patience. No. They have just about managed to have enough variety of tempo and feel across the fourteen songs on the album.

They’ve also sensibly realised that every band needs airplay, especially mainstream airplay, so even Rock bands have to be able to come up with a tune or two that are a little bit more radio friendly. The trick is to do it without alienating your existing fans or sounding lame. Again, they have managed to find it in their locker to come up with such tunes. ‘Drive’ was the first single off the album and it just had enough in it to keep it on the right side of radio friendly and it has got the radio play it deserves, as it is a fine slice of melodic Rock, with a good guitar lick and a fine melody and chorus. ‘Maybe You’re The One’ goes a step further, being a genuine ballad (their first) without a hint of being wimpy. ‘I Wanna Party With You’ is a love song wrapped up in good time party song and is a fun album closer.

There are other textures to the album too. On songs like ‘Rock Hallelujah’ and ‘Highway Radio’  the band exhibit more than a hint of their love for the Southern Rock of  the likes of Lynyrd Skynyrd and I detect the influence of classic American rock song-writers such as Bob Seger or Sammy Hagar. Indeed were we not to know their origins and the slight Nor’n Ir’n accent Tom Harte’s singing voice betrays, Trucker Diablo have the authentic feel of an American band travelling up and down the highways and bi-ways of the USA. You would have to hope that, given the chance, the band could make inroads into the american market. But Trucker’s stock-in-trade is riffage and although there are variations, a big chunky riff is never too far away and songs like ‘When’s It Gonna Rain’ and ‘Shame On You’  hammer this message home in emphatic style before the aforementioned ‘I Wanna Party With You’ closes the album.

The band should be very proud of their efforts. It is a strong album that reinforces the band’s reputation while proving at the same time that they are clever enough and good enough to bend a little towards commercialism without ever remotely selling out. Knowing the band, they will gig consistently to promote the album, securing festival slots and the odd support to a more well-known act, all of which should raise their profile and secure more fans. It’s a crowded market-place out there, with several bands of their ilk doing the rounds, be it the UK, Europe and the U.S. but Trucker Diablo can certainly hold their heads high, look to the future with some optimism and we should be proud to call them our own.

Trucker Diablo – Fighting For Everything