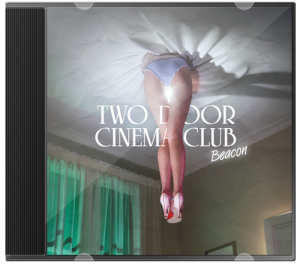 After the success of album number one, Tourist History, for many it was a case of anticipation – could they possibly top it, or even meet it. Having played the world over this past year, including having a headline night at Belsonic Festival in Belfast, and Alex Trimble being asked to make an Olympic appearance as vocalist on ‘Calibans Dream’ (making for one of the best acts of the opening ceremony) the Bangor lads have already done themselves, and their country proud. There is only one way to top that; a hit second album. And so, at the start of this month they gave us Beacon, only two years after their first.

The record kicks off to a start with ‘Next Year’, electro beats met by Trimble’s recognisable vocals. It is a fantastic upbeat, confident track with lots going on. With interesting guitar lines and an infectious chorus, it is unmistakably Two Door. As the album swoops into ‘Handshakes’ we are given more of an electro – pop sound, with synth and filtered vocals. The signature guitar lines are never too far in the distance though, filling every inch of space with delay effects and tremolo.

‘Wake up’ is classic TDCC and it could have walked straight off Tourist History as a summer hit. So far we have been given the same indie-pop that made us fall in love with these guys in the first place, and while everything remains relatively the same, there are signs of progression. There is a more mature feel over all, with a lot more emotion and truth behind it. Loneliness and missing home seem to have lent inspiration in some of the lyrics, which tells us the trio are as grounded as ever. There are still signs of the classroom geek in Trimble’s song writing, with lines like Maybe someday / You’ll be somewhere / Talking to me / As if you knew me.

The indie-pop three piece take a slight detour of direction with ‘Sun’, with a funky, horn filled chorus and some of their best grooves. Nothing has changed with this record in regards to the bands love for effect pedals; they really can do some tremendous things with a guitar. The first single to come of this record is ‘Sleep Alone’, which has a slight melancholy to it, with more evidence of apparent loneliness. It is a top track and a perfect insight to what you should expect of the album, though you can’t help but feel it is no ‘Something good can work’. The track is laced with smooth guitar lines and hammering beats, which leads us into the guts of the song.

‘The World Is Watching’ proves that the band can continue to make a standard 6 string electric guitar sound like something special and unique. Female vocals lend a hand for the chorus and slightly haunted harmonies. This track makes for the most instantly lovable off the album; it is sweet but not sickly, and perfect for a night time drive. You will find yourself humming the chorus long after the album has played out. Beacon’s shining light.

It is no stretch of the imagination to think of Two Door as a band without a drummer; with many tracks feeling like a drum machine is the lad’s best friend. This isn’t a hindrance but a showcase of why the guys have been taking over festivals the world over, having solid kick-pedal-beats, which take centre stage throughout the chorus in ‘Spring’.

There are parts of this album that feel a little lazy, in that they could have been taken straight off Tourist History, namely ‘Wake up’ and ‘Someday’. With that being said, the production of the album is immaculate and signs of Jack Knife Lee are subtle but evident. The guys definitely have a formula and they are sticking to it, they know their sound and it’s a sound that has put them where they are today. It may be a case of “don’t fix what isn’t broken” and rightfully so, as Beacon makes for an instantly likeable second album, letting Two Door Cinema Club escape that old second album cliché. We can all relax now, post anticipation, and enjoy.