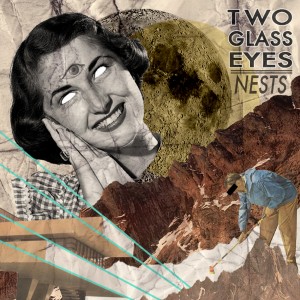 Post rock, new grunge, alternative, whatever other vague sub-genre you want to slap it with, you have to face facts: alternative rock is making a comeback, and it’s firmly staking it’s claim- all while in minor key. The alt-rock trio, Two Glass Eyes have just released their second EP to much acclaim. Originating from the North Coast, Nests is their eagerly anticipated follow up to their 2012 debut, Seats And Windows. Having played a highly impressive amount of gigs throughout the past year, how does their penchant for playing live translate onto tape?

The wistfully tinged opener, ‘Like A Wreck’, contains mirthless vocals and melancholic riffs, but somehow manages to dodge the colour-by-numbers college rock bullet of taking itself too seriously by building up to a resoundingly powerful chorus. Catchy for all the right reasons, Two Glass Eyes are off to a strong start.

As the EP progresses, Nests just seems to get better and better. By the time it gets to ‘Would You Notice’, the – dare I brand it indie-rock? – ballad contains hints of Young The Giant in places, but with a more biting twist. By ‘In Love With Wait And See’, I’m completely won over. With Donnelly’s urgent vocal delivery veering between smooth and acerbic, bursts of guitar, well paced bass and resilient drumming, it’s altogether pretty brilliant.

Winding down with the more contemplative ‘Seats And Windows’ and closing on ‘Cause To Rewind’, both of which are indefinitely of a more dreamy consistency and highly harmonic, Two Glass Eyes have created what most bands would barely be able to achieve in the space of a ten year career. Having produced such a release within just over a year, big things are definitely ahead for the trio. As some might say, blinding, Two Glass Eyes are well worth keeping an eye on.

◀ STANDOUT ⁞ In Love With Wait and See ▶
◀ SOUNDS LIKE ⁞ Foo Fighters ▶

The Twilight Sad at Auntie Annies