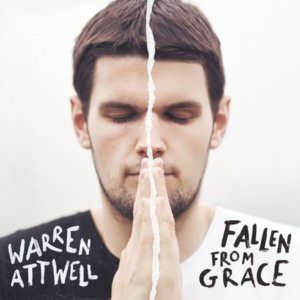 Warren Attwell is a singer-songwriter from Richhill, Northern Ireland. In April this year he brought us his 6 tracked EP “Fallen From Grace”. Drawing influences from the likes of John Mayer and the Goo Goo Dolls, Attwell has been trying his best to make a mark on the local scene, playing gigs around the country with secured slots over the winter.

Attwell kicks the record off with electro beats and melodies, leading us into ‘Please don’t leave’. His vocals are strong yet warm. This track would easily fit in on mainstream radio; it’s a likable pop song and sets the tone off nicely for the rest of the EP.
‘Time’ has a slightly darker sound, with filtered vocals, slightly distorted guitar and Wah pedal effects, though remaining firmly in the Pop genre.

The record takes a slower pace with ‘You’re not the only one’, the records ballad. Attwell seems to have drawn his lyrical inspiration from relationships, and this track is no different with a nod towards something worth fighting for. Female backing vocals fill out the chorus, adding a new dimension. Comparisons can be made to Boyce Avenue and Mayer. ‘She’s gone’ carries the same tone as the rest of the record, melodic guitar and vocals being his strongest instrument, with keys layering the background. There is a slight melancholic feel to this track. There is some nice solo work on the guitar, along with interesting layered vocals, on the bridge.

It is easy to imagine fans of One Republic or Ryan Sheridan enjoying this record, it is easy going Pop, which isn’t down in the dumps but also isn’t too up beat either, there is a nice balance. ‘Like only you can’ follows suit with its chorded melody and strong vocals. The EP draws to a close with the title track, a slightly haunted number with blunted beats and low Organ tones. Female backing vocals make a re-appearance, giving a sweetness to the track whilst melodic keys give it a bit more depth.

Over all Attwell has done a good job in making a good very-soft-rock /Pop record. It is a bit samey throughout, but it doesn’t necessarily get boring. With that being said, if it were a 10 song album the verdict may have been a little different. He knows his sound and it works, there is definitely an audience out there for him.