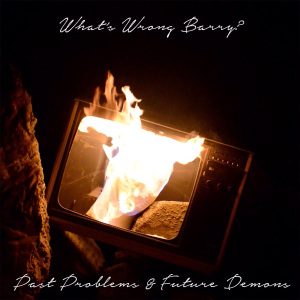 In the digital age, it’s getting harder and harder for bands to remain at arms length from fans; mysterious; coy, even. Some still manage it somehow, such as Kilkeel natives What’s Wrong Barry?, whose Facebook page reveals almost nothing about them, their history or even what they sound like. Presumably they want people to listen to them and decide for themselves? Whatever their reason, the best we could come up with is that the band’s first gig was in February 2014, their first EP – Problem 1 – came along in May 2014, and they won a coveted spot on Tanglewood Festival’s main stage that year, too. We can also tell you that the band are a trio, consisting of Paul on vocals and guitar, Neil on bass and backing vocals, and Leigh on drums (no surnames of course. Don’t be silly!). Their second EP, Past Problems and Future Demons, was released in February this year.

The EP opens with an intro track of sorts: ‘Embers’ begins with a rather lovely, understated classical guitar performance. After a minute or so the other instruments kick in, creating a metal-edged rock track devoid of vocals. Hmm.

Track two, ‘You Say Arsonist, I Say Antagonist’ slams into gear immediately however, with frontman Paul unleashing a fierce, guttural scream over some nifty hardcore. The result is somewhat disjointed at times but there’s no mistaking their fury and energy. Lead single ‘An Eye For An Eye’, with its skittish beat and syncopated bridge is another interesting number, laden with menace despite the occasional disparity between the lead and backing vocals.

Flitting between rock and metal, ‘Bring Your Army’ starts with a bass-driven groove before launching into a piledriving, blastbeat-filled bridge which lasts for almost half of the song’s duration. Then, following bridging track ‘Blurred and Broken’, with its glimpses of tech metal, the EP finishes with ‘Can’t Catch a Whip’, which sounds similar enough to the preceding track that one wonders why they didn’t just record them together as a single song, as both mix metal and hardcore (making the band, in theory at least, metalcore) with both vigour and vehemence.

Past Problems and Future Demons is an EP that certainly shows great promise, but there are a few issues: chief amongst them is the incongruity that rears its head in both the music and vocals. It’s no secret that metalcore mixes both heavy metal and hardcore; however the blend needs to be seamless. Here, it is often glaringly obvious – at times they sound like a metal singer fronting a hardcore band. That won’t work. Further, the backing vocals are too soft and ‘clean’ to really compliment the harsh lead vocal style. By all means, use both a ‘scream’ and ‘clean’ singer, as many metalcore bands do – but each must get equal time and attention; the backing vocals on this EP almost sound, again, like they’re from a separate band. It’s all about the blending, lads. Blend!

Should What’s Wrong Barry? smooth out those rough connections they will undoubtedly be a force to be reckoned with. May make it harder to remain so enigmatic, though…