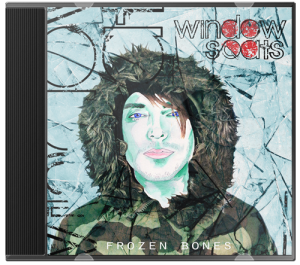 Window Seats‘ latest EP, ‘Frozen Bones’ certainly bares a fitting title. Upon my first listen to the release, I was left with shivers down my spine. Window Seats are certainly ‘alternative’ rock. In the five tracks on this EP, we are presented with a wide spectrum of genres and a clear view to the influences the band are deeply inspired by.

Within ‘Rats’, we can hear delicate verses that tug at your heart-strings akin to the likes of The Smashing Pumpkins, a chorus that could have just as easily have been pounded out by the Foo Fighters. Combined with the powerful, raspy vocals of Jude McCaffrey, it is a very powerful track to open with, and we are taken on a rollercoaster of sounds throughout, coupled with great lyrics such as, ‘just doing your job / won’t get you by / there’s more to life / than nine to five’, it is a sensational track to open a phenomenal release.

‘Local Superhero’ is a superb track, the intro riff reminded me of Funeral for a Friend, and we can most definitely hear a sound similar to that of Northern Irish compatriots A Plastic Rose coming through heavily on this track. I was so impressed with the production on this track, on this entire record (mixed and mastered by Neal Calderwood), it’s incredibly empowering, painted in lush vocal hooks and with a simply stunning promotional video – what more could we ask for as a listener?

‘Try Hard’ brings to mind once again, the Foo Fighters, (heavy influence with a twist, some of the earlier stuff such as ‘Big Me’), although a regional accent is quite prominent in this track, very similar to The Undertones in their prime with a much rockier tone to it. I think this is the track which delivers the most passion on the release, and I was incredibly impressed by it. Lyrically this track is a delight and a wonderful vocal range is showcased throughout!

‘Juliette’s Letter’ and ‘Star’, to me sounded like one of those songs I’ve heard on a television advert and spent hours trying to find it on YouTube afterwards! The song writing prevalent on this release is so clear and concise, it’s easy to overlook just how good these guys are on their instruments, we have a constant drive from the rhythm section which heavily populates the track. I was so shocked to discover that this band are a 3 piece as they have a much bigger sound than most bands with extra members. Providing upbeat pop music, with great walking bass lines, pounding drum beats and lush melodies; this is a fantastic EP.