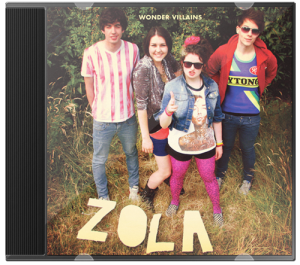 The Wonder Villains have been stealing the hearts of Northern Irish music lovers over the last few years. Now their music is being showcased to a much broader audience, after recently supporting the mighty General Fiasco and having been recently added to the BBC Radio 1 playlist. It’s easy to see the reason for this, as the ‘Zola’ EP packs a mighty pop punch which, without a doubt, will leave you humming the chorus hooks for weeks after hearing it.

The title track ‘Zola’ has a phenomenal, blistering chorus, ‘the keeper said to Zola / you’re dead when this is over’; careful pronunciation of the lyrics from Eimear Coyle makes this a truly terrific track with fantastic rhyming couplets and stunning vocal harmonies. I’ve had this EP on repeat for hours; and it doesn’t lose its spark- it just keeps growing on me!

The demo included on the EP ‘Running in Circles’ is another number with a great hook, and I’m keen to hear the finished product of this song. This song has enormous radio potential, as do all of the songs, and it’s no wonder this has been reeling in mass downloads and gaining so much publicity. In terms of production, this EP is superb (recorded by Peter Doherty @ Neon Noise Studios and mixed by Rocky o’ Reilly @ Start Together Studio). A very polished release, that compliments the songs so well and in no uncertain terms, leaves you wanting to hear more.

’33’ kicks in with a pounding drum beat – showing the skills of Kieran Coyle behind the kit, which is a true foundation stone within each track from the band. The intricate and exciting synth sections from Cheylene Murphy have become a signature part of the band’s sound by now. It’s hard not to crack a smile when listening to this band. I think most people have a soft spot for this band. The Wonder Villains have sunshine spilling from their collective veins, and have put FUN back into music for these ears.