Zia Regime – For Neither God Nor Master 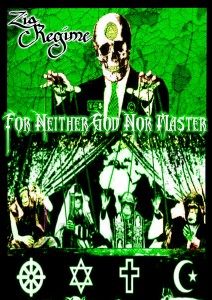 Zia Regime’s For Neither God Nor Master has been highly anticipated. Forming in 2009 and releasing their first EP The Idea Of Me in 2010, the Derry/Limavady based quintet have played a relentless string of shows and have released their new album to a steadily growing group of dedicated followers. So after extensive amounts of pre-production, how does For Neither God Nor Master sound?

The introduction that is ‘Waves of Anxiety’ opens the album, the atmosphere created very much in keeping with the foreshadowing resulting from the title- tense, brooding and aggressively ominous. The sense of foreboding continues for the duration of the track, which effectively utilizes a variety of effects and instruments only to create a more intense feeling of suspense.

Weaving into the first full-blown track, ‘No Gods, No Masters’ draws heavy influence from both Alice in Chains and And Justice For All… era Metallica with its chugging bass and dual guitar layering, courtesy of guitarists David Carlin and Michael McGonigle and bassist Conor Somers. A very promising opening, especially for such a highly anticipated album.

‘Shadow Games’ was the first song to be released from the album as a preview, which also doubled as Zia Regime’s first video. Evocative of Pantera, this weighty, riff saturated shredder of a song is definitely worth a listen. ‘Time Forgotten…’ serves only to showcase further the band’s technical ability, furious and thundering sounding throughout. A frenzied, yet somehow well paced track, of which Eamonn McNaught’s manic drumming and a howling, incensed vocal delivery from David McDonough are key components.

The breakdown heavy ‘Plutonian Aftershock’ is a full on, no holds barred, heavy piece of metal. Including a blistering guitar solo and some intense technical work from the entire band, this also demonstrates how powerful a force Zia Regime’s rhythm section really is, being able to support such numerous layers of guitar and vocals.

‘Solitaire’ is slightly more reflective than it’s predecessors, and the second single released by the band. Operating at a slower pace, but by no means less robust in sound, it has a strikingly nihilistic feeling to it, which is consequently added to by McDonough’s attempt at Layne Staley style vocals- which are admittedly, quite effective.

An instrumental generally risks coming across as unfoundedly ambitious and somewhat unnecessary, especially whenever it is coming from a metal band, so I freely admit that I had my reservations upon realising that an instrumental track had been included. This only makes it more impressive considering, as even I can appreciate that ‘Blinded Mirrors’ is an intricate piece of work and manages not detract in any way from the rest of the album, as other instrumentals can sometimes tend to.

‘On Through the Black’ is a resilient, hard-hitting track, which again has definitive nods to Pantera among others, however the band thankfully manage to put their own twist on what could otherwise potentially have been viewed as a straight up tribute.

The penultimate track, ‘Thorns’ is rather difficult to describe without repeating myself, but I’ll try regardless: if this song was a person, it would be one of the most violent, aggressive psychopaths you have ever met, and I mean that in a good way. I honestly don’t think there is any better way to describe it, but all I can say is that if you even think that you like metal, just go and listen to it.

‘Hell’s Prayer’ is the final track, and brings the album to a close on a triumphant note. A decidedly bleak sounding track, switching between gloomy and abrasive throughout, it is again complex yet accessible, builds successfully upon itself and is even complete with a rather catchy refrain.

All in all, For Neither God Nor Master is definitely more than worth the wait. If this doesn’t make Zia Regime ones to watch for 2013, I honestly don’t know what will- I’ll be very surprised if there is a better or more professional sounding metal album released this year, so if you haven’t listened to them yet, I cannot recommend enough that you do.

The Twilight Sad at Auntie Annies