Open House Festival is branching out for 2015 and is hitting the road with a fantastic line-up for some unique venues.

Never one to disappoint, Open House Festival has been going strong for 17 years in Belfast and more recently in Bangor, and are more  than delighted to announce their first ever tour 28 Feb – 4 March, a mini festival each night in unusual, intimate quirky venues in Portrush, Rathfriland, Hilden, Holywood and Bangor. 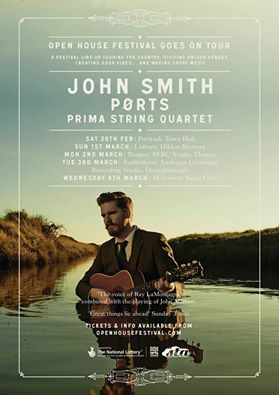 The Open House tour headlines John Smith, the guitar man from Devon who has become one of the most exciting artists on the new British folk scene and whose music was recently described as “the voice of Ray LaMontagne combined with the playing of John Martyn”; PØRTS, the 4-piece indie-folk band from Derry-Londonderry currently being championed by Cerys Matthews on BBC 6 Music and finally The Prima Quartet,  whose fantastic collaborations include acts as diverse as Lady Gaga, Pink, Belle and Sebastian and Best Boy Grip.  This is one tour not to be missed.

All tickets available through www.opehousefestival.com  Please note there are different booking routes for each venue.

Stream: PORTS – Reading in the Dark