The second gig for this week from Strange Victory is that of Veronica Falls on Friday 19th in Voodoo (The first gig is the Twilight Sad in Auntie Annies tomorrow night). Having been labelled by various press sites as “goth-pop” one would be tempted to think they lie on the heavier end of the spectrum yet this is far from the case. The indie -pop band are fond of their sugary vocals and endearing guitar solos as evidenced by their album, ‘Waiting For Something To Happen. ‘ The album produced by Rory Attwell has received very positive reviews from the likes of Pitchfork, Q and Uncut to name-check a few. In short a gig you would be mad to miss out on!

Support on the evening comes from Belfast’s own Sea Pinks who will no doubt deliver some shimmering guitar based pop! Tickets are £9 and you can find out more information over at the Strange Victory website. 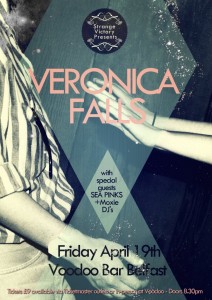