by Michelle Harris
in News

Volume Control are hosting their Summer Fest with a stellar line up showcasing some of the best local talent Northern Ireland has to offer. This is a special one day event which is sure to help round off the summer in style.

To get you in the mood for this one off event, here’s a guide to each act to give you an idea of what to expect:

From humble beginnings in a farmhouse garage in L/Derry, The Wood Burning Savages have proven themselves to be strong contenders in local music with their slaying live deliverance. Since it all started in 2012, the band has toured America and are now regulars at festivals around the UK and Ireland. More recently, they have shown off their punchy songs at Glastonbury on the BBC Introducing Stage. Listen out for compelling vocals combined with a vigorous musical style.

The Clameens have come a long way since winning a competition to play at the first Volume Control gig of last year. The indie-pop band from L/Derry have proven to be a force to be reckoned with in local music. From supporting The Undertones to an appearance at The Great Escape festival in Brighton, things look set to get even better as they are in the process of recording their first E.P.

His New Atlas is the stage persona of Eoghan O’Hagan who at 19 years old is gradually surging into the spotlight. He’s been busy completing two Irish tours and has already released two EPs. All of this in less than a year. Armed with his guitar, Eoghan sings with candour and impassioned vocals enough to create stillness amongst an audience.

Adam Montgomery and Ben Robinson make up alternative/folk outfit Sullivan & Gold known for their soulful and stirring melodies. You might know them from their previous work in ‘The Good Fight’ and be aware of their graceful, emotive sound. They released their album ‘For Foes’ with Smalltown America and have been impressing audiences around Northern Ireland so be sure to experience their atmospheric stage presence.

Those Ghosts are an alternative band who have already proved they are something special by winning first place in Chordblossom’s Kickstart 2013 Competition. They provide alt-rock anthems that get the blood pumping and sustain interest throughout their stage presence.

LORIS are an up and coming electro pop trio who are sure to be on the radar a lot more in the next while. They released their debut single ‘I’ve Been Quiet’ in 2013 and since then they’ve received airplay on BBC’s Across The Line and have even caught the ears of BBC Radio One listeners on Jen and Ally’s BBC Introducing show. 2014 looked set to equal big things for LORIS as in January they were featured by ‘Best of British Unsigned Bands’ and were played across 16 European countries. They are currently working on their debut E.P with Michael Mormecha.

It’s safe to say that BeeMickSee is unique, choosing to rap in a Belfast accent. To describe his music as catchy would be an understatement. He gets venues jumping and will give the impression that you are in Chicago rather than Gordon Street in Belfast.

Yes, it’s Freak’s with an apostrophe which is apparently a tribute to some graffiti found in Strabane. We might not know who the Freak is or what they own but we do know that Freak’s are a band with bundles of energy, eccentric song concepts (has anyone else written a song about 5p crisps?) and an indie-pop soundscape.

You may have seen him serenading the streets of Belfast in the past. Owen McGarry is one of those musicians who can be described as captivating both onstage and on record. What makes him special is his ability to hold the audience in the palm of his hand through his storytelling style of music.

Paper Man, despite being relatively new to the music scene, have a polished sound that a lot of young bands fail to reach at the beginning. Each sound sounds like a mesh of A Plastic Rose to Smashing Pumpkins.

Treehome are no strangers to the Volume Control showcase having performed at last year’s competition ‘Clash of the Newbreeds’. Since then they have continued to keep the local music scene afloat with catchy melodies soaked with soul and funk.

When you listen to Jamie Brown, you can’t help but fall for her gentle vocals. She’s a story teller in her own right with her personal yet relatable tales in her lyrics.

The Volume Control Summer Festival will be acoustic singer-songwriter Patrick Moore’s first major gig so be sure to give him a listen and experience what he has to offer.

The festival takes place on Saturday 23rd August at the Oh Yeah Centre, Belfast.
Doors ►1:30pm
Tickets ► £8 (available from WeGotTickets or at the door) 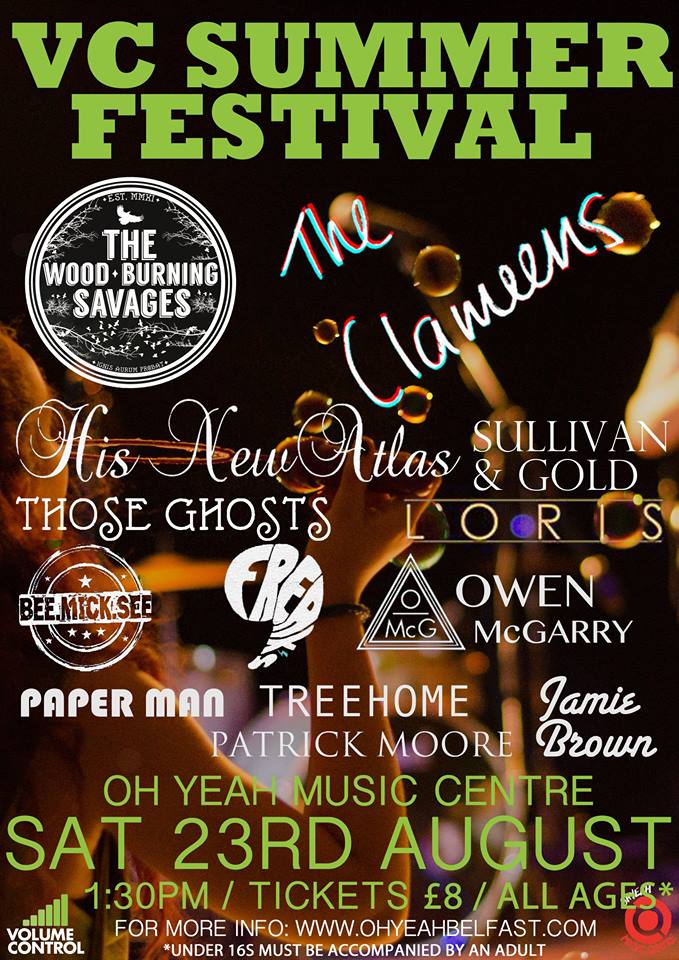