It’s as simple as this: Last year Ajenda released their debut album ‘Unrecognisable’ and it is as good an album as you will hear within their genre of  radio-friendly Rock. Honestly, it is. It’s not about liking an album because Ajenda is from Nor’n Ir’n. That’s got nothing to do with it whatsoever. It is top class and an album I still listen to long after my reviewing duties made it required listening.

The first video/single taken from the album, ‘Tattoo’, was a no-brainer for me. It was my song of last year from any band. Following it up must have been a slightly more difficult decision for the band. ‘Unrecongnisable’ offers up many candidates – ‘Hollow’ and ‘Paranoia’ would not disappoint, ‘Fragile’ or ‘Heaven’s Tears’ would be slightly more commercial options and then there is ‘Otherside’, which just screams ‘hit’ to me. So, I must confess that ‘Hatred & Greed’ was not the song that sprung to my mind when I heard the second single was due. What it signals to me is that Ajenda very much want to emphasize the heavier side of the band’s nature and that it is a band made up of some seriously talented musicians. It is not all about Jen Walker’s vocals – fantastic though they are. Ajenda can play and have a real mature ear for song-writing.

From that point of view, this release does make sense. From Jan Uhrin’s funky opening bass line, to Gavin Cairn’s insistent guitar riff and taking in the interesting time changes later in the song, it certainly shows the band off to a T and assures its Rock credentials are intact. I still wonder if, commercially speaking, the band may need to release ‘Otherside’ to really raise its profile, perhaps to a non-Rock audience. A band this good deserves an audience. It deserves the backing of its home nation first and foremost. So check this band out and get out to see this band as soon as you can. 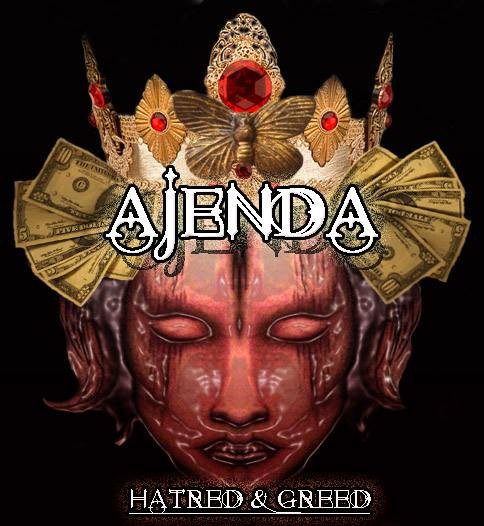