All Of Your Ruins – ‘Into Oblivion’

The debate about whether technology makes it easier or harder for bands to get noticed these days, is one that shows no sign of abating. I tend to err on the ‘harder’ side of the argument because the internet is now awash with bands who, thanks to modern technology, can all sound brilliant, can all have impressive videos and can all get their stuff ‘out there’. In my day, (puffs on pipe and polishes horse brasses) the whole process took longer from inception, to songwriting, to demos (cassettes!) to sending it to DJ’s who cared about unsigned bands, to underground demo magazines for review or a review in the demo review segment (usually very small) of a music magazine. But then, there was at least the slightest chance your demo, should it get any sort of attention, would be listened to at least by the teaboy at a record company. As a listener, if you wanted to hear new music in those days, you had to go to a local bar, tune in to Peel et al, or send off a postal order to a band you read about in a magazine for a copy of their demo cassette. They arrived like messages in a bottle from far off lands. A previous band of mine sold demos on the mainland, N. America, S. America, Eastern Europe, Scandinavia etc. Now, at one click of a search engine, the new music aficionado is like Sting in ‘Message in a Bottle’ waking up to find ‘100 million bottles, washed up on the shore’. There is almost too much choice.

The other thing was, if your first demo was a bit naff or, if your style morphed over time, as most young band’s will, then the only trace of past errors and mis-steps was the 50-odd copies lying in the bottom of a few drawers here n there, only to surface in the happy event you became famous and they make the owner a wee fortune. Now, once it’s out there, it’s out there and someone could click on your band name and be taken to your best, most inspired moment creating a new fan for life or, alternatively could find footage of that time the singer got drunk and started throwing your single around the venue shouting ‘Frisbee for your dog!’ (Now who would do such a thing?)

No matter. In this case, the glory of modern technology allows me, the previously uninitiated about All Of Your Ruins, to not only check out ‘Into Oblivion’, but also chart their progress from their earlier material. Doing so does show a band that has changed slightly from their earlier material of 12-18 months or so ago. Even allowing for greatly increased production values (Manor Park never fails to deliver), ‘Into Oblivion’ is punchier, more visceral and altogether more grown up than anything the Belfast-based 4 piece had previously served up. In short, it is proof of a band, learning from mistakes, becoming better song-writers and really getting to grips with who/what they want to be. I, for one, like the direction they are heading – modern Alt-Rock with plenty of bite.

Shame though that, since recording ‘Into Oblivion’, the band have amicably parted ways with singer (Sammy) who appears on the song. He too had shown a real maturity in his vocals compared with earlier recordings. New boy, Ryan Belshaw, will have his work cut out replacing him. I wish the band well. The lads did very well being voted in the Top 20 of Kickstart 2015 by our contributors – a vote of confidence by more than just myself here at CB. I look forward to seeing and hearing more from them in the near future. Check them out. 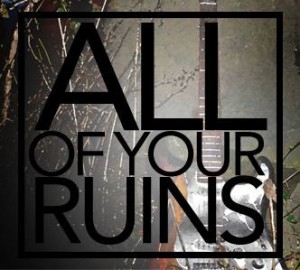