Derry native, Kevin Rotherham, has certainly put the miles in since leaving the Maiden City, where he had played with bands like the Paperjays. He has toured Northern Europe and the U.S. as a singer songwriter, honing his craft and eventually, as he describes it, finding his own style. That style certainly seems to have its roots in the U.S. and ‘New York Love’ was recorded at the Lakehouse Studio, New Jersey along with some other tracks due to be released as an E.P. later this month. So, while I am a bit late to the party reviewing this single, the timing is perfect in terms of directing your attention to his music in time for the E.P. launch.

As I said and, hopefully, you will hear when you listen, there is a definite U.S. influence at work here, in more than just the title. Jack White (in all his various guises) and Hozier are massive and that influence is bound to influence a host of aspiring artists, neither would Rotherham be the first visitor to N.Y.C. to be enthralled and awed in equal measure and feel the urge to commit this to song.

The rawness to the start is an acquired taste, but Rotherham’s high raspy voice is not and it carries this tune along very nicely, giving it edge and hook in equal measure. My one quibble is that the chorus is very basic and is repeated a little too much for 3 minute song. I am not sure it is a big or clever enough chorus to so totally dominate a track. But there is no doubting that Rotherham has talent and this certainly whets the appetite for that E.P. due later this month.

If it has whetted your appetite to see Kevin in the flesh, he has taken up the offer of the residency in the newly refurbished River Inn in Derry, where he can be found on Thursday and Friday nights from July 16th onwards. Other dates in Ireland and further afield will be announced in due course. 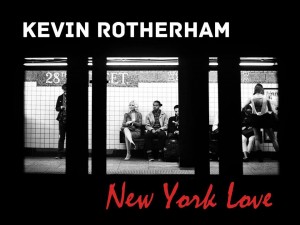