Formed in 2006, Limerick’s Senakah are by no means a new name in Irish music. To date, their career has taken them from Limerick to America and back to their homeland again, with all the bumps ‘n bruises to show for it no doubt. The band has never been short of critical acclaim either for their debut album, ‘Sweeter Than Bourbon’, or last year’s follow-up, ‘Human Relations’ but perhaps have not seen due rewards for all their efforts. Yes, being signed by a German record company and being endorsed by equipment manufacturers, Peavey, has helped raise their profile but there is still work to be done to get this band the reward their hard work and dedication is due.  But the latest single from ‘Human Relations, ‘Sinking,’ – a song that has been used on RTE Radio 1’s ‘Media Show’, could very well be the song that finally sees the band break through, at the very least on this island.

It is a wonderfully powerful (and catchy) anthem. Building in a way not dissimilar to Starsailor’s ‘Good Souls’, this is anthemic guitar-based Pop at its best; full of direction, purpose and crescendo. The production has been very effectively handled by Noel Hogan (The Cranberries). Hogan has kept the guitars high in the mix, but allowed the effective bassline to add that extra bit of variation to the sound, especially during the intro and verses. Rob Hope’s vocals are suitably fantastic, soaring above the music in a way that reminds me of Tom Chaplin (Keane), with timely subtle feminine harmonies from bassist, Yvonne Conarty.

This is a song that deserves to heard by a wider audience, to be sung at the top of their lungs by the multitudes thronging against a festival crash barrier. For my money there are bands out there with much bigger profiles who haven’t written a song half this good. Senakah are a class act. So people, my message is clear. If we want good music to survive and thrive, we have to support it.

So get your cursor over this link, Buy Senakah – Sinking Click and ‘add to cart’. 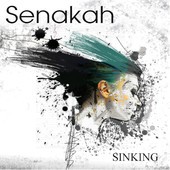