The Red Velvetines → ‘Come With Me’

Ballymoney’s The Red Velvetines have been around for a couple of years now and have already put together a very solid body of work and a lot of gigs in the right places; rarely failing to impress. Their sound is a mixture of the Blues Rock of the likes of Black Rebel Motorcycle Club, the Alt Rock of Queens of the Stone Age and a touch of Brit Rock thrown in for good measure.

What sets them apart is having a female lead vocalist. Sometimes, to my ears anyway, there has been a tug-of-war between the musical direction of the band and Claire’s voice. I wasn’t always sure the two things were in sync. Claire has such a sweet voice with such great tone, it almost seemed that the low-down-n-dirty blues the band was playing was just not the right backing for her. But with all bands there is a period of growth and experimentation and ‘Come With Me’ puts my doubts to rest. It is a real culmination of the music and the vocals. The vocal duelling between Mark Blair and Claire really works, with Claire’s voice having found a harder edge, not unlike Pat Benetar, which shows me she can cope with this heavier stuff, without losing tone and control. The music has a real groove to it, with the distorted bass guitar and insistent guitar riff pounding away, but never losing sight of the vocal hook ‘I’ll take you home…if you come with me’.

If this is a signpost to where The Red Velvetines are heading, I’m hitching a ride.

‘Come With Me’ is available now from http://theredvelvetines.bandcamp.com/ 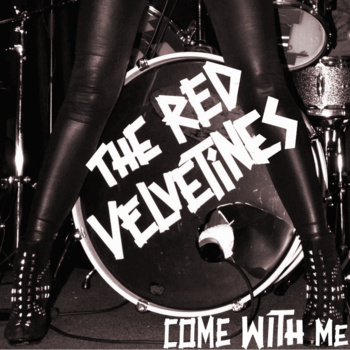