Tonight We Live – ‘We Call This Home’

Kildare 4 piece, Tonight We Live, was formed in 2011 and has not let the grass grow under its feet with constant gigging including some local festival slots. Most notably, winning the Slam Dunk 2013 competition to earn a place at the renowned festival. Recording-wise, the lads have already released their debut E.P.  which they gave away for free to spread the word about themselves in June 2012, and released a debut single in March 2013.
ADVERTISEMENT

So far, so good. Tonight We Live has laid a good foundation to this date and clearly know how to write a tune, a remark I make not solely based on ‘We Call This Home’, for if you let your soundcloud player keep running you’ll hear the rest of their back catalogue. The band show an ear for melody and certainly are musically proficient. Stephen’s Youster’s little-more-than-whispered vocal is seductive, though part of me wonders how well it transfers to the live arena (have seen bands with this style suffer playing live).

If you sensed a ‘but’ coming you aren’t wrong. It is a ‘but’ I have said before, when reviewing bands of this style i.e. ‘Pop Punk’. I feel it is a sub-genre that has its merits but that it is also at over-saturation point, where 1 out of 5 bands that pass my way are very, very similar. So, in terms of their careers, Tonight We Live are playing catch up, not only with the first and second wave of Pop Punk bands, but are behind bands even on this island who are ahead of them, Sethway – to name but one. A further ‘but’ is the production on ‘We Call This Home’. The levels are interesting, if deliberate, but for me don’t work. Whispered vocals punctuated with a very harsh snare sound are just wrong, with the guitars so compressed and low in the mix. Whether this was by design or simply by a lack of money/assistance in the studio, I am not sure, but people judge with their ears and set against their peers, this would suffer by comparison.

Bottom line is though, there are bands that can be made sound great by a good producer but if they don’t have the songs then they will still fail. I feel Tonight We Live have the songs, just need the funds to record/produce them properly. That’ll come. I’ll be keeping an eye out from now on. 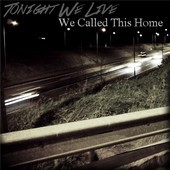