We are very pleased to announce that one of the most talked about Northern Irish bands of 2014, The Wood Burning Savages, are set to headline Chordblossom’s live gig launch night next month!

Set to kick off a series of monthly CB live music showcases at the recently renovated The Bar With No Name, on Friday 10th October we’ll celebrate the re-opening of a special live venue alongside a highly anticipated EP launch for one of the most exciting unsigned bands on this isle.

Derry’s The Wood Burning Savages will launch their new EP, ‘Boom’ with a very special gig in The Bar With No Name in Belfast on Friday 10th October 2014. They will be joined by special guests Freak’s, Hot Cops and His New Atlas. Doors: 9pm – Admission: £5 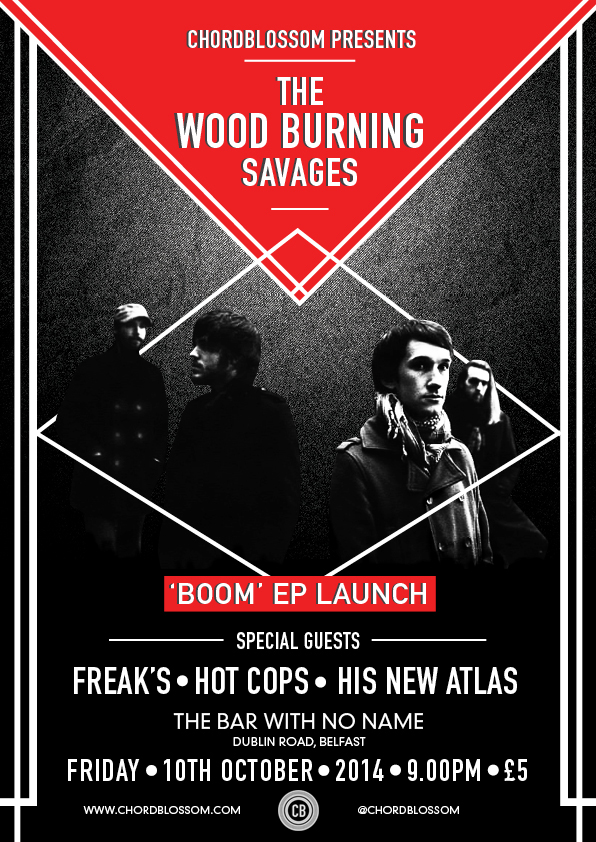 Earmarked by CB as one of the most essential Northern Irish live bands of the past few years  (a viewed shared by 6Music’s Tom Robinson) you can now see for yourself what all the fuss is about as the incomparable The Wood Burning Savages tear into town to celebrate the release of their long awaited EP ‘Boom’.

The feisty Derry four piece have enjoyed an incredible Summer, from playing remote Irish islands to the career making BBC Introducing tent at the UK’s largest music festival, Glastonbury!  Their brand of adrenaline pumping breezy rock has to be seen live to be believed. With the high octane ‘Boom’ only a taster of what is still yet to come. With all eyes and ears focused in their direction, you’d be mad to pass on this opportunity to see them at such close quarters.

Strabane’s Freak’s first peaked our interest as finalists in our 2014 Kickstart competition. Since then they’ve been busy winning over everyone else with two smashing singles, first the quirky ‘Number One’ which references Rory McIlroy, Sherlock and Timbuktu. The second. ‘A Minute More’ was the perfect summery ear worm that held in a deeply emotional message for the band. We hold the Strabane natives in high regard and hope that after seeing them for yourself, you will too.

Apart from the fact that they’re an intriguing live prospect, little is known of Belfast’s Hot Cops. The fact that they were inducted into Oh Yeah’s Scratch My Progress programme speaks volumes to the potential that the five piece exude. Expect plenty of nods to 90s rock, just expect to be impressed.

His New Atlas is one of our youngest yet hardest working musicians, notching up over 200 shows in the space of 18 months across the UK and Ireland. His ambient acoustic stylings have won him plenty of plaudits and if proof is needed that he’s one worth watching, treat yourself to a listen to ‘His Young’ the stunning first single from his newest EP, Torn Out Lungs.

The Bar With No Name is the name of the newly revamped Auntie Annies on the Dublin Road, Belfast. Always renowned for supporting the local music scene and of course hosting a few big names over the years, we’re over the moon to be putting on one of the first live gigs since the doors re-opened.