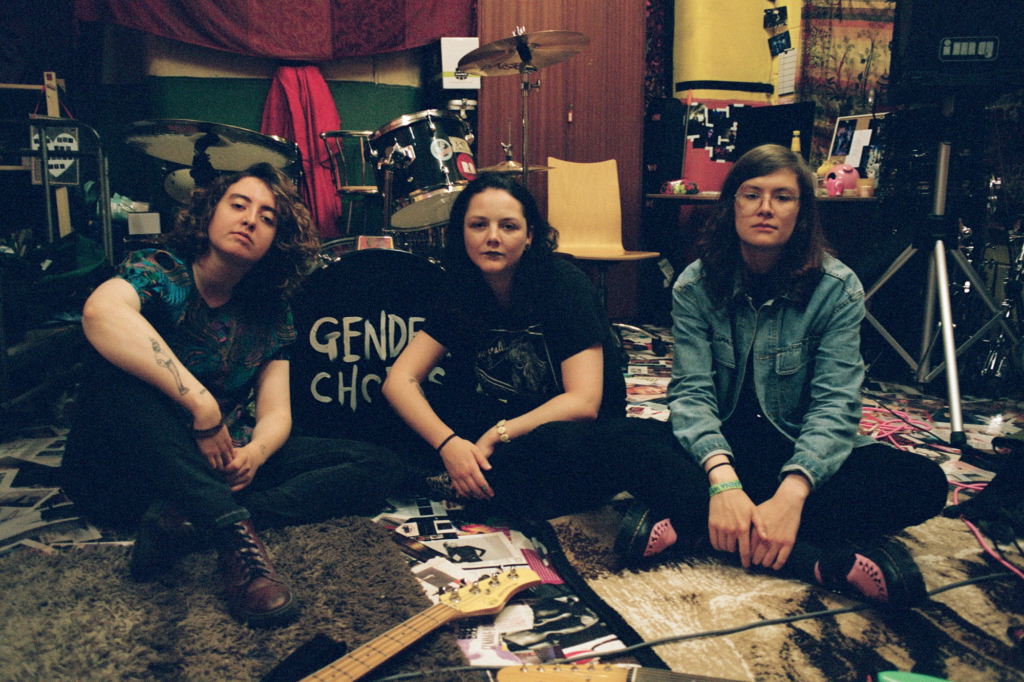 “Leave out the politics and just stick to music”, shout many a Facebook user as (mostly indie, left-leaning) musicians share their takes on Brexit, upcoming elections, and the climate crisis. Luckily these bands are louder than the keyboard warriors, reminding them that the act of pointing out glaring social inequality and injustice is an issue of voice. And if you have one, why not use it?

Doing so, thankfully, is Gender Chores. Their new double single premiered and previewed today comprises of ‘Giz A Smile’ and ‘Toast Sandwich’, carrying the double weight of speaking up on current societal structures that disadvantage women in the workplace, and ultimately anyone not in the top 1%.

‘Giz A Smile’ is a response to the heightened scrutiny – and often danger – women so frequently find themselves in, cut from the same cloth as Courtney Barnett’s ‘Nameless, Faceless’ – fed-up and tired, but not defeated. Echoes of all-too-familiar misogynistic one-liners structure the track, underpinned by eerie basslines and guitar screeches: ‘I’ve bought you a drink love, now give us a smile / doesn’t that make you mine?’. Simply by imbuing their lyrics with the sentiments of pick-up culture, and unsolicited remarks upchucked by strangers onto the nearest women in bars, the band hold up a mirror to the very culture that fosters them.

‘Toast Sandwich’ is a scuzzy, grungy ode to life under capitalism. Languid guitar strums pick up pace in the later verses to an agonising state of anxiety, spitting out the long list of expectations and resulting feelings of failure imposed on millennials and Gen Z.: “Can’t afford to do anything (about it)”. Gender Chores capture the pervading feeling that no matter how hard you work, you’re not quite productive enough; the cycle of constantly treading water. A curt nod to those at helm of the ship, Gender Chores express an afterthought. “Oh Theresa, F*ck you.”

‘Giz a Smile’ is dedicated to bar staff everywhere, or to anyone working in a customer-facing job really. It expresses that anger and resentment that builds when you feel pressured to act and look a certain way. It also touches on my own personal thoughts on misogyny, entitlement and sexism in the workplace.

‘Toast Sandwich’ is a big dirty hot take on capitalism. We all feel that frustration of constantly working hard and feeling as though you have nothing to show for it, feeling like you’re getting nowhere fast. It questions the pressure that we feel to always be productive and that idea that there’s something ‘wrong’ with just doing… nothing? Like, that’s totally OK and really necessary sometimes.
Gender Chores