However with dynamite metal instrumentation and a frontwoman who’s voice can soar to stunning highs yet plunge to the deepest growl , Derry’s Making Monsters might just have cracked the formula. Proving their worth across the British isles with tours and festival slots, metal taste makers across the world are beginning to stand up and take notice of one of our fastest rising rock acts. Ahead of a number of Irish shows, we chatted to the band to find out the secrets behind their burgeoning success.

► You recently got back from touring across the UK with Max Raptor, how was that?

Paul Monk (Guitar): The UK tour was amazing and eventful to say the least! We can’t wait to get back and grab the mainland by the balls again!

► How did you find your first UK tour?

We’ve done road trips before when we  travelled to Wales in 2013 for Hammerfest and playing small Irish tours, but nothing like this. Touring is definitely tough at times, depending on how many members (in our case four); you have four different personalities, moods etc all traveling together for weeks on end. Of course it’s not always going to be smooth sailing, but for the most part it was brilliant and life changing, something to tell the grandchildren!

► We’ve seen the band improve and grow with every new release. Who or what do you think has been the biggest influence on the band’s development over the years?

Not to sound cheesy but the main influences have probably been the people around us, friends and family. Everyone has been so supportive, especially more recently as the band has progressed and grown. There’s nothing more satisfying than making the people close to you proud and that is one of our aims! We’ve been working at this too hard to stop now and still have a long way to go. We have no plans of slowing down either.

❝ The Paramore thing is a bit annoying at times as it sometimes feels like it’s the first thing people think because we’re a female fronted band.  ❞

► You’ve been featured by various rock taste makers recently such as BryanStars. How did these come together?

I guess it’s a combination of fans sharing our music videos online, hard work and perseverance. Between sending our stuff to anyone and everyone and gigging as much as possible. Fans started cropping up from other countries and getting in touch with us, buying our merch and it just kind of kept going.

I think our debut music video “Instinct” made some people take us a bit more serious and regard us more than ‘just a wee local band’. Once the second video ‘What It’s Worth’ was launched about 6 months later, having found ‘our sound’ and with the help of our new producer Neal Calderwood, we saw a massive increase in buzz and press.

► You once again worked with acclaimed local Director Darren Lee for your most recent video. What do you think makes him so in-demand with local acts?

Because he is the best in the country, it’s that simple. Darren is a legend, very chilled out, open to ideas, and brilliant at making those crazy ideas come to life with his videos.

► What’s the story behind the concept of your video?

Because forests and abandoned houses are cool, I suppose? We like to keep the lyrical content and imagery open to interpretation, but the idea of the blindfold scenes reflect the darker half of the song as it progresses.

► New track ‘Limits’ has been receiving a lot of Paramore comparisons, as a band with a back-catalogue of heavy tracks do you mind the comparisons?

To be honest, the Paramore thing is a bit annoying at times as it sometimes feels like it’s the first thing people think because we’re a female fronted band. We all enjoy a bit of Paramore, but they are definitely not one of our biggest influences. It’s understandable with this track as its probably our most commercial and they are undoubtedly one of the biggest bands in the world so it can’t be a bad thing either!

► You’ve got some rather snazzy and distinctive merch, who are the brains behind the designs of that?

The merch is normally a collaboration between myself and an illustrator we work with from Manchester, called Dominic Sohor. I sometimes pitch ideas to the band or vice versa, then we pass them onto Dominic and he’s brings them to life, sometimes a couple tweaks and colour changes along the way, but i think he’s the perfect guy for our style! Merch is crucial, so we always try to make it eye catching top quality stuff!

► Aside from music, what do aspiring metallers get up to in their spare time?

Emma is an artist and illustrator, sometimes found horse riding or playing on her farm with the animals. Joe is a jack of all trades; from building and inventing stuff, knowing almost everything about everything and he sometimes tour manages and drives other bands on tour. Brian just loves drums, they make his face do smiles and stuff. He’s often off getting something tattooed, pierced, playing drums or watching Ghostbusters. I spend most of my time with my daughter, but I do make the odd homemade pizza and from time to time go fishing.

► You’ve already secured support slots with some of the top names in UK rock. Is there one of those nights in particular which stands out?

It’s hard to narrow down. The Young Guns tour last year was a great experience and playing to a sold out Academy in Dublin. The feedback from that tour and new listeners gained was overwhelming. Recently we played a sold out Camden Barfly in London as part of the Max Raptor tour, that was pretty surreal too! 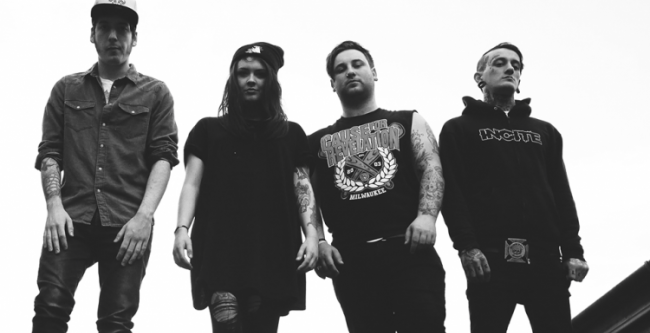 ► After the release of ‘Limits’ is there an EP in the works? If so, what is it set to sound like?

‘What Its Worth’ was the first single, and ‘Limits’ is the second single taken from the next EP, we’re hoping to release it in a few months time!

It’s A LOT bigger than our previous stuff and our proudest work yet. We’ve matured a lot as songwriters and musicians since the first EP and we feel a lot more comfortable with our sound. Still plenty of riffs, big drums, and vocal hooks, just a lot more like a ‘proper band’ if that makes sense.

► What should we expect at your upcoming Irish shows?

We’re geared up to play a Belfast show at Radar on Thursday 27th February with Chocolate Love Factory and Green Monkey. Then 18th February we’re in Omagh, 15th March back in Derry at Masons then we have a Dublin show 5th April. Make sure to come down and find out what we’re all about! We will be playing the new EP in its entirety along with some old favourites!

► Finally, it looks as though you’ll be pushing hard throughout the rest of 2014. Do you have any specific goals which you’re aiming to achieve over the next few years?

To tour the entire UK again is a main priority and to get onto the festival circuit. Someday get a label and possibly release an album? In the long-term we would like to make this a full time career, so hopefully things continue to grow and fall in to place!