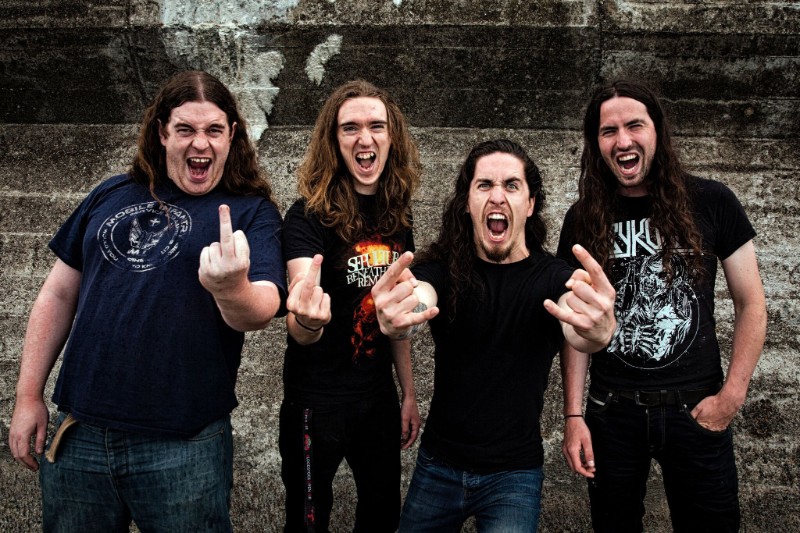 Fresh from their gloriously triumphant Thursday night set on the Sophie Lancaster Stage, we got the low down from Dublin thrash metal youngsters Psykosis on what drew them to thrash, where they want to take the band and how much they’re loving life right now (hint: a LOT).

►Chordblossom: So. How was last night?

Psykosis: (howl ecstatically). So many people! It was great! The sound was really good and it was just…unbelievable.

Psykosis: It was a really good crowd. But that means you weren’t here to see us!

►CB: I wasn’t unfortunately! I only flew in this morning.

Psykosis: That means you didn’t get a free beer!

►CB: Sadly no! But a load of other artists who were here last night said that your set was fantastic. You had everyone’s attention: there was nothing else on, it was just you guys playing so you had all the focus.

Psykosis: Yeah! It was actually the perfect slot. We played on the New Blood stage two years ago so which was amazing, but this was even better. And all thanks to sexy Simon (Hall, Metal 2 the Masses organiser): we love you Simon! (Start chanting “we love you Simon, we do!”). Did you hear about the chameleon that couldn’t change colour? It has e-reptile dysfunction!

►CB: Anyway! It must be pretty cool playing somewhere like Bloodstock?

Psykosis: It’s so cool. We played the New Blood tent two years ago which was massive, we really made the most of it. We made the absolute f**king most of it! Then Simon emailed us and said “can you come back? Can you up the ante?” And we upped the ante! And to play on the Sophie Lancaster stage – I mean, you can say no more than that. Absolutely amazing. Every band should get on to the Metal 2 the Masses competition – it’s a great opportunity; seriously, just go for it. The things it’s done for Irish bands, Scottish bands, Welsh bands: it’s put them on the map. I mean, a band from the Faroe Islands played at Bloodstock because of it: who the f**k knows about heavy metal, or even music, from the Faroe Islands?!

►CB: True! So, obviously you’re a thrash band. Why? What drew you to play thrash?

Psykosis: Because when we pick up guitars, and play music we like, it comes out as thrash. So it’s actually not ‘thrash metal’, it’s ‘Grant metal’, or ‘Tony metal’, or ‘Tom metal’ or ‘Jay metal’. We’re playing music that we like, and if at some point it changes, it will still be music we like. If you like it, f**king happy days! If most people like it we’ll play festivals like this. If we go back to playing small gigs in Dublin, as long as we’re happy with the music – no problem. And if you come see us, whether it’s on a big stage like Bloodstock or a small stage in Dublin, it’s the exact f**king show; we’ll even give it more if it’s a ten person show! Because we love the music, and it’s f**king enjoyable. It’s also what we grew up listening to: Slayer, Metallica, Sepultura, those kind of bands. (They briefly break into song as Skid Row blares out of the fairground ride).

►CB: What do you think of the thrash scene today?

Psykosis: Brilliant, fantastic. We’ve done underage shows which are packed to the rafters; you’ve got eight year old kids there. Even when we played with Nuclear Assault, that was an underage gig and there were kids everywhere. It’s so good to see young people still listening to it. The scene has not died in Dublin, it’s still very strong. We met this couple at a gig. They had brought their son. It was Evile playing, and we sat and talked to this kid and his parents. He’s now in a band playing thrash metal! All the big thrash metal bands that we grew up listening to – we love Overkill, we love Exodus – they’re still bringing out really exciting thrash albums. They’re really accessible, people are still really getting into them. But enough about the established bands; there’s the up and comers like Reanimator, Killface, Gama Bomb…all these underrated bands that are phenomenal – they’re literally so talented and they should all get a shot here. Bobby Blitz said something really interesting: he said thrash metal was created at a time when the economy went down. We’re now at a time where the economy has gone up and back down again and you’ve got this thrash revival. Coincidence? So maybe there’s a cultural need for thrash metal. And look at Sepultura: they literally got Brazil through so much tension and stress, because there was so much corruption there. And they sang about it and spoke out against it; all of their songs are about that. So what we’re saying is, we’re saving the world! ‘Thrashformers! Robots in disguise!’ (laughs). And the new thrash bands that are coming along in the next wave: Havoc are a huge influence, even bands like Bonded By Blood – there’s so many.

►CB: So who do you want to see this weekend?

Psykosis: (Flirtatiously) you! (laughs). And we’ll be heading to the New Blood Stage and the Jagermeister stage. Yes, you have the main acts, but you have to see the bands that are going to pave the way for the future! These (headlining) bands are going to die off in a few years, so you need to see who’s coming. The difference with Bloodstock is they offer opportunities to new bands like ourselves, which has launched us to Slovenia, Germany, all over Europe to play festivals – all because of that stage over there. So what’s different here is, it’s not Wacken or any like that – and I don’t mean to sh*t on other festivals, but this is unique because of the New Blood Stage. And we love the headliners, everybody does, but we can see them in Dublin. There’s something youthful and energetic on the New Blood Stage, there’s so much passion. It’s not a job for them and that’s what we’re interested in.

►CB: Would one of your ambitions be to headline somewhere like this?

Psykosis: Yeah man, one hundred percent! But we won’t be writing the music that suits a headliner (slot), we’ll just be doing our thing. If it comes up, it comes up; if it doesn’t we’ll still be there playing thrash metal. If that’s what the crowd wants, we’ll literally give them ten times what they want. It’s that thing of ‘do what you like, and like what you do’. And it might seem like we’re complacent but we’re not: if we get that slot we’re gonna rock the f**k out if it! But we’re not going to change to get it. It would be great, but…let’s see what happens.

Psykosis: Album launch! September 16th, Welcome to the Psyko Ward. It’s our debut album. And next year we’re thinking of doing a UK tour, so stay in touch! We are ‘Psykosis Thrash Metal’ on Facebook, Twitter, Instagram…you’ll find us. Or we’ll find you! (laughs).

►CB: Thanks guys, and enjoy the rest of your weekend!