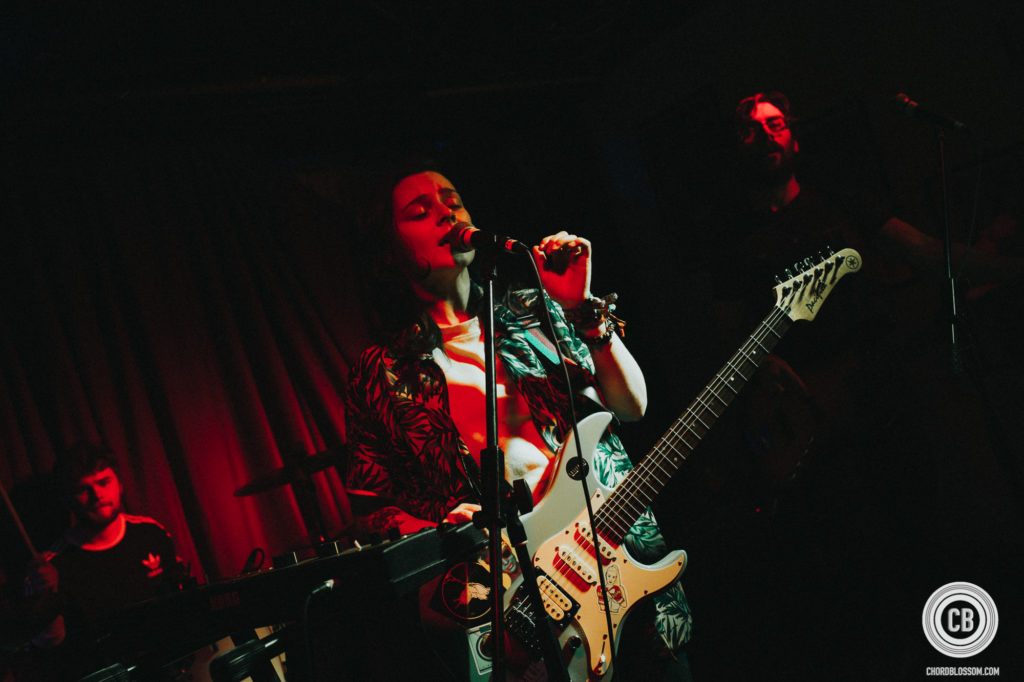 Queens’ new Speakeasy reeks of having something to prove… which it does. Say what you want about the local scene, but they have a long memory and there were few happy with the decision to get rid of Mandela Hall. There are shoes to be filled, whether the new venue likes it or not. More compact and claustrophobic than its predecessor, tonight the upstairs hall plays host to the Across The Line lineup for the BBC’s Day Of Music – A wealth of local talent is on display, each one different than the last, with the eyes of the city turned towards them.

Despite this seeming pressure, there are jokes and laughter from the performers before they take the stage. Alt-rockers Wynona Bleach have a second gig in Dublin tonight, meaning a quick skedaddle is on the cards. In defiance of this seeming made for cinema plot, there is much humour about the situation, and the crowd shares some good-natured laughs with the band, happy not to have their enviable problem. Such is the flavour of the night: unpredictable, but not without its playfulness.

First to take the stage is LARKS, who perform a slashed back set of lo-fi, ethereal music. Ghostly vocals, the main draw of the show, are brought firmly into the foreground by the absence of a drummer. Using hard-hitting vocals with a soft-spoken delivery, frontwoman Fiona O’Kane plays the part of a mini Anna Calvi, flush with a muted confidence that does not require pomp to cast its spell. Chatter at the bar ceases as she and her male duet sing their way through a set that sounds like everything from country to pop. Viscous sounding and buoyed by the contumaciousness that comes only from being alone on stage, LARKS put the speakeasy on notice.

Next, on stage come Wynona Bleach who recant their story for tonight. They dedicate a song to their sound man who has travelled to Dublin ahead of them and thank everyone for showing up to the first of their shows. The show itself seemed more reminiscent of an opera, as the onstage presence seemed to adopt a life of its own aside from the music, with piercing guitars and echoes lining an aesthetic of neon green and black. The mould of a young indie band, Wynona are the anthesis of their opener, bringing a huge sound with an indie pedigree. Playing a song from their upcoming EP Graves, the five-piece trod the line between rough and gentle through their entire set, displaying their expertise and penchant for theatrics throughout. Enjoyable and appropriate from start to finish, they leave the stage in a hurry to a round of whoops, eager to make ways towards their next show. Dublin doesn’t know what it’s in for.

Final act Susie Blue take the stage shortly after, addressing the crowd with quick banter before launching into their set. An undeniably distinct motor pushes them, with their bluesy rhythm accelerating and slowing down seemingly on a whim, maintaining control of the room and inspiring hip sways and head bangs around me. More than anything, however, I am drawn to the vocals which seem to be as much an instrument as any guitar on stage. Gyrating between haunting and heavy, they are the perfect engine to drive the rock-centric canticles. Intelligent lyrics and bouncy breakdowns mean there is plenty for the crowd to either dissect or dance to, all the while maintaining the penchant for rock and roll.

The night ends as it started, suddenly. The lights return and before I am aware the band has dispersed, mingling with fans and friends, laughter resumed. As if nothing has happened. The building may be new but clearly, the spirit is still present. We can only hope it translates into more gigs like tonight.