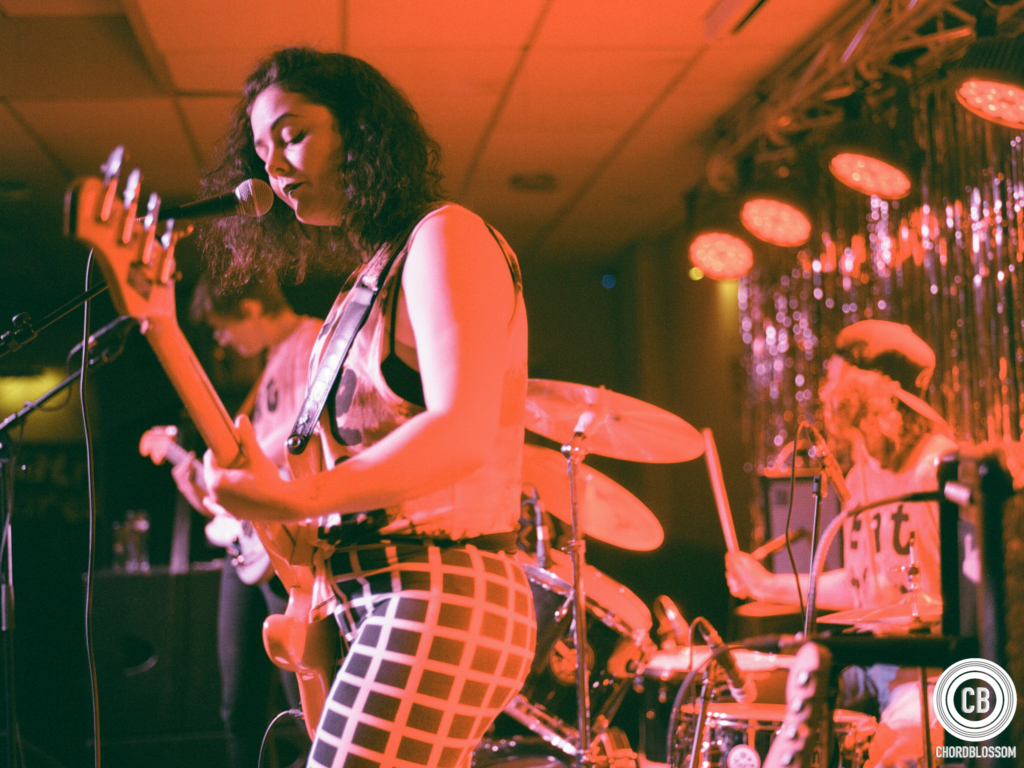 Belfast’s beloved working men’s club turned indie watering hole, the Ulster Sports Club, though young in its revamped incarnation, has proven itself to be among the most consistent and gracious hosts of local talent this past year. Last weekend, it felt the perfect fit for Gender Chores’ single launch.

The gig in itself a critique, middle finger, and declaration of solidarity against all things exclusive, oppressive, and misogynistic; the Ulster Sports in its repurposed state provided a welcoming home for the young punks and a beautiful reminder of change and progression.

Interactions between sets showed Gender Chores and their respective supports to be equal parts friends and fans. Though I arrived as the metaphorical curtain fell on Sasha Samara’s solo set, the crowd reaction and later praise by her peers was telling enough. A sorely missed opportunity to see the Scratch My Progress alumn shed the band for a singular spotlight, ukulele-in-hand moment.

A switch-up for Strange New Places saw them perform sans drummer, becoming ‘Strange Acoustic Places/Gentle Places’. Lead singer and guitarist Ash took the opportunity to strip things back by playing a grungey, jangly acoustic arrangement of Gender Chores’ ‘Womansplain’ alongside the band’s own catalogue. Ash’s heartfelt lyrics are delivered with a nonchalance that makes them all the more unconsciously poignant, as she introduced their set with their usual tagline “we sing about being queer and sad and stuff.” Strange New Places normalise the most alienating of feelings, performing as always with a much-needed warmth and sincerity, a wrap-around that lasts far longer than their set.

“Get a bit closer and lick the monitor,” coax Gender Chores, taking to the stage in identical tie-dye T -Shirts emblazoned ‘Eat The Rich’. There’s certainly something to be said for starting as you mean to go on. Their anti-capitalist costumes perfectly in tune with the evening, the three-piece incited a ruckus of a response to lyrics old and new. Namely, “F*ck The DUP” was received with an unprecedented level of “yeos”.

Dedicating one half of their double single ‘Giz A Smile’, premiered here last week, to bar staff, misogyny and being forced into performative femininity in the workplace, and its counterpart ‘Toast Sandwich’ to a life free of capitalist structures, Gender Chores racked up an almost protest-level fervour among the gig-goers. The new singles were given a rowdy welcome to the world, with a fuller, garage-punk live sound. Still, the band kept it light-hearted and fun, enlisting Shannon of Sister Ghost for a rendition of Courtney Barnett’s defiant ‘Nameless, Faceless’, and laughed their way through songs in the face of a minor setback – drummer AJ’s pedal ripping clean through the bass drum. An unnecessary reminder that Gender Chores hit hard.