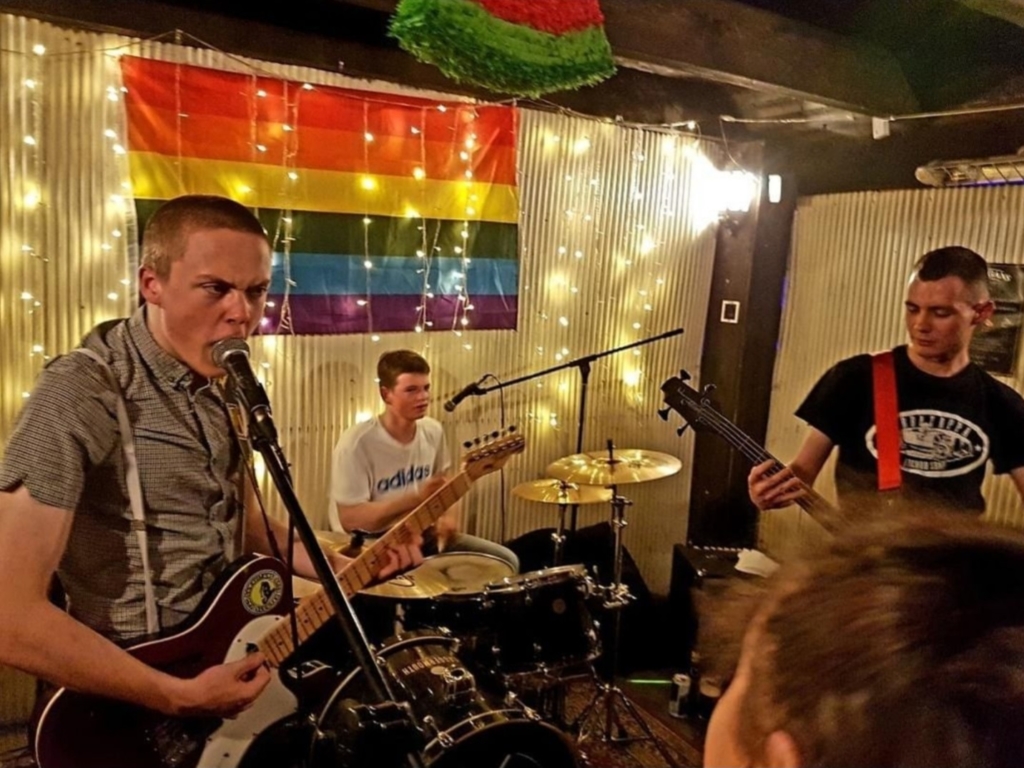 In the height of Derry’s Rewire festival, which had the town bustling full of people, music and events on every corner, No Collusion were launching their EP ‘Sticking Sets’ in Bennigans bar.

No Collusion are the next big Derry band who are destined for fame. They’ve already scored airtime on radio shows from Derry to France and earned over 40 thousand views on their music video for their song ‘Aw Naw’. I arrived a little early to the usual mellowed out and homely mood of Bennigans to the sound of a live jazz band. I knew this was the calm before the storm!

Salt the Snail kicked off the night and they really knew how to put on a good show! They immersed the crowd from the get-go right through to the very end, and made use of all the space in the venue, including the roof. They started their set by giving out party hats with song names written on them, and by choosing the audience members one at a time to decide what song to play next.

Each song seemed to have its own mini game: ‘Laser Quest’ had glow sticks thrown around in a show of multi- coloured lights flying about overhead; another song brought in a sea of bubbles from the two bubble machines stationed above the stage. But when the song ‘All Hell’ began, I could see why it had that name, because it didn’t take long before all hell really did break out: There was an insane mosh pit, bubbles, ladders, and an inflatable pizza; the front man migrated from the stage onto tables then began to hang off the rafters before climbing onto the roof and hanging upside down to finish off the song. I would say they blew the roof off the place but they would quicker pull it down. I have never experienced a performance so entertaining and chaotic than Salt the Snail.

Another band on the rise is Gas Hands who pierced us all with their energetic punk rock. It didn’t take long though before their ferocious playing unexpectedly snapped a string, but they filled in the time by starting a singalong of ‘Kumbaya’ while switching guitars. Strange as it was in contrast to their usual fast paced and heavy tone it was a nice rest from the moshing and gave us all time to enjoy the ringing in our ears. The confidence and passion of Gas Hands is clear through their music, which is written and played with extreme talent and love for the art. After recently releasing a fiery single you can expect to see a lot more coming from Gas Hands.

Daft Punk band Crapsons were next up. For a two-piece, they made a sound powerful enough they could have been a full electronic, super grainy orchestra of punk. There was a ruthless mosh forming fuelled by the nuclear rhythms, bringing out the headbanger in everyone. I’m sure I saw a few people nearly drown under the sea of moshers and I was nearly one of them. No Collusion’s Shea crowdsurfed around while chaos carried on below. It was an atmosphere of sheer invincibility and unity to the backing track of “She’s got 42 wheelie bins”. This was Crapsons second time playing in Derry, and I’m certain that people will be patiently waiting until the next time they grace us with their unruly energy.

Launching their long awaited EP ‘Sticking Sets’, No Collusion never disappoint with their aggressive, raw punk. The subject of their music has crowned them with the title of “Derry Chats”, which is shown in songs like ‘Jim’ and ‘Aw Naw’, which talk about Bucky and cheapos. No Collusion’s angry sound could be a product of some boy stealing their baccy, it’s sure to get anyone in a bad mood- sure goes for a good song though. No Collusion have their own unique energy, their music is relevant to our day in topics of discussion and frustration such as problems in Stormont and why you really shouldn’t slag off their tunes because “[they] will just kill”. They don’t hold back, and like true punk, they share the perspective of the youth in the midst of all our current political problems from Brexit to Stormont. The power of their music is reinforced by their energy and influence on stage as they are able to take control of the room with ease and had us all tied in from start to finish.

It’s one thing just listening to the EP, but hearing it live is where it really comes to life. No Collusion could raise an army with the strength of their sound on stage. Seeing them live is also where you can hear the chants of “Free Dualta”. They are living proof punks not dead, because what is more punk than getting kicked out of your own gig? No Collusion have the potential to be the next world famous punk band, making tunes we can all listen to well into our future without the songs ever losing that fresh buzz and contagious energy.