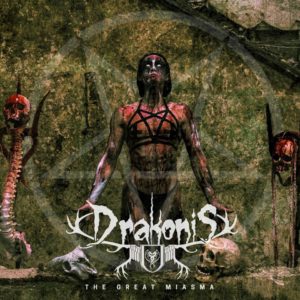 The dictionary definition of miasma (‘an oppressive or unpleasant atmosphere which surrounds or emanates from something’) is also a pretty decent description of death/black/extreme metal; fittingly, Lisburn-based extreme metallers Drakonis have included it in the title of their upcoming release, The Great Miasma. Having grown from a studio project to a fully-fledged band in 2015, this is their third EP, following on from 2015’s Ravens Fuel the Sky and 2016’s As They Rot. A few lineup changes along the way (most notably Altus frontman Steve Reynolds stepping in to take over vocalist duties) and being signed recently to Hostile Media signify big things to come for this young band; does the EP reflect this?

From the outset, it becomes clear that …Miasma is a concept album: the lyrics all tell the tale of a young woman being consumed by the Devil, and the video for each song will eventually piece the story together visually as well. The title track sets the scene nicely with a creepy, horror movie-esque intro (think ‘The Omen’) which only becomes more atmospheric when the double bass drums slam in. Over harmonised, almost choral guitars, Reynolds snarls and spits out the tale of the unfortunate young woman who falls victim to demonic possession and human sacrifice – standard tropes in black/extreme metal, but done with almost gleeful aplomb here.

Second track ‘Let Us Pray’ is both faster and more immediate than its predecessor, with harsh guitars and a midsection that is laden with menace. This is clearly the beginning of the ‘human sacrifice’ section of the story, with the protagonist speaking to his (“oh) master” and exhorting “come brothers let us pray” (along with a dark and sinister as hell accompanying video); the sinister spoken word section is also suitably sombre and demonic (the Lord’s Prayer said backwards, of course). Reynolds is in excellent form here, as his voice rises and becomes more deranged and exultant as the song nears its conclusion, which joins almost seamlessly to…

Final number ‘Queen of Swarms’ – all seven minutes forty-six seconds of it. Slamming into top gear immediately, the song carries the listener along with a beautifully developed sense of horror and inevitability; the female sacrifice is consumed: what will she become? Is the answer alluded to on the EP’s instantly iconic cover photo? We shall have to wait for this final video to be released (and goddamn can we not wait for that one!). With a blistering pace change about two minutes in, an intense yet oddly melancholy guitar solo midway through, and a triumphant chorus (“Hail, hail to the Queen of Swarms!”), it’s the best track by just a slim margin; the addition of guitarist Saul McMichael’s growly backing vocals adds a deeper, death-ier tone to Reynolds’ more black metal style. The atmosphere climbs, the tension builds…then the song slowly tapers off to a long, acoustic-led outro, possibly signifying that the Queen has left to unleash her evil upon the world, leaving the listener breathless and stunned.

“What happens next?” is not only what you will ask as The Great Miasma fades out, but also a great question to put to the band themselves. A follow up EP, describing the ensuing carnage of the Queen of Swarms? A new story, told from the start? Or even (please!) a full-length album, with all of that and more? Whatever it may be, we can’t wait to see what further oppressive and unpleasant delights emanate from Drakonis in the future.