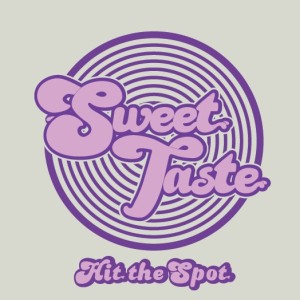 There is a lot to like about Sweet Taste. Since their formation in 2009 and despite various line-up changes, the band’s main men of Niall Graham and Chris Seaton have dragged the band up out of the ranks of the also-rans to become one of the brighter lights of the healthy N.I. Rock scene. They have racked up gigs at all the right places (as well as being supporters of those venues when other bands play) and have rarely failed to impress with their infectious band of Heavy Rock with a groove, not a million miles away from mid-1970’s era Aerosmith. Perhaps only the aforementioned line-up changes have held back their progress, though not enough to prevent Rocksector records picking them up for this E.P. release (their second E.P. since their debut in 2009).

And, just like the band itself, there is a lot to like about ‘Hit The Spot’. The four songs have life, groove, exuberance and enthusiasm – again these are the traits of Sweet Taste as a band. From the call-to-arms ‘Get Your Groove On’ through the funk rock of ‘Lost My Mind’,  to the rabble-rousing ‘Knocked Out’ and finishing with the freight train that is ‘Midnight Train’ the band show they can write a great rock tune with plenty of soul, groove and originality. The E.P. demonstrates a fantastic guitar sound from Seaton which , combined with the riffs themselves really should’ve meant this E.P. was absolutely going to live up to its name and hit the spot.

That it doesn’t quite do that is a disappointment to me and a puzzle that I have tried to work out. What exactly is missing? Two things.

Well, first of all, the bass guitar is too low in the mix. It certainly doesn’t match the strength of  Seaton’s guitars. I don’t know whether it’s the fact that new bassplayer Mark Russell didn’t have time to bed in to the point where he could stamp his own authority on the recordings or whether it’s simply a production/mixing issue, but it is a massive hole in the ‘soundscape’ for me. The guitar sound would not have suffered one iota from having a stronger bassline behind it in the mix, in fact I think it would have improved it.

The other issue is again, one of production. I like Niall Graham as a singer and a person. I have seen him live and he is a good frontman and a tuneful singer, but he has been hung out to dry with the vocal production on this E.P. He may lack the ‘edge’ to his vocals that a Tyler or Robinson have (most singers do) and it is something he has to find if he is to improve, but the production, especially the lack of any noticeable effects on his vocals, make his vocals sound plain compared to the music. I have to question the lack of effects,  backing vocals or multi-tracking of the vocals at certain parts of each song. There are multiple guitar tracks, so why not vocals?  ‘Midnight Train’ is the strongest song overall on the E.P. and that’s because it does have a few backing vocals and Graham’s voice shows a bit more aggression.

Sweet Taste can write the songs and they can perform the songs. What was needed was a bit more work on certain areas of the recording to bring everything up to the same production level as the guitars and then I think it really would have hit the spot. But this E.P. is certainly good enough to solidify Sweet Taste’s local reputation.

Small Back – No Stranger