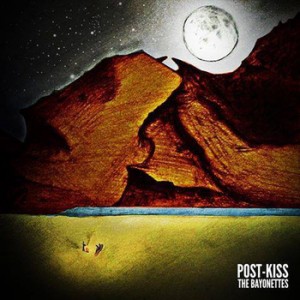 Following some drastic changes in their line-up, the Bayonettes have regrouped and are officially back in action with the release of their new EP, Post-Kiss. The departure of drummer and co-founder, William Keers, has brought an end to the previously favoured undertones of slick grunge and polished punk present in The Bayonettes’ earlier releases, with the addition of Shane McMullan (bass, backing vocals) and Brandon Ali (drums/percussion) and Sam Foote’s transition from bass to lead guitar, (Danny McClellend, having remained on vocals and guitar, is the only member who has resisted the urge to change his role in the band). They have ditched their biting rock sensibilities of old for bright, heavy only on the treble-style, ambient indie.

This genre change is particularly evident in the opening track, the pleasantly atmospheric, ‘Let Me Show You How I Disappear’. Despite stretching to just over six minutes in length, with its persistent beat, stealthily growing combination of strangely melodic guitar tones and McClellend’s crooning blending effortlessly with the yelled vocals of the chorus, this is a track that mixes radio-friendly pop sensibilities with a fresh, stripped back alt-rock tone. Just when you’ve been lulled into thinking that you’ve managed to comprehend how The Bayonettes have chosen to restructure their trademark sound, the brilliantly energetic ‘Honeyglum’ manages to not only defy, but completely derail any prospective pigeonholing. Verging on rockabilly, and reminiscent of Songs For The Deaf-era Queens of The Stone Age, it punches your presumptions square in the face, right before going on to have the best breakdown on this EP.

Followed by the heavily percussive, somewhat extravagant and almost anthemic ‘Perish Song (Love Will Eat Itself Alive)’ – the shortest track on the EP, at a mere four minutes- and the auditory love letter to The Cure that is ‘B.O.Y.’, it is increasingly clear that with Post-Kiss, The Bayonettes have taken some highly abrasive, heavy duty sandpaper to their definitive sound and have not only smoothed out, but all but eradicated the rough, harder rock edges from their music in the process. The closing track, ‘Pocketwatch (Make Time For Everything)’ only exemplifies this further, and is on the brink of falling into early U2 territory, such is the stadium rock vibe.

By no means is Post-Kiss any less of a release because of this- on the contrary, it is mature and melodic in its composition, and very much a pleasant listen- but the fact that they have retained the name “The Bayonettes” makes it a strange experience if you happen to be familiar with their previous releases- it’s not unlike watching NOFX become The National. Call it a coming of age if you will, but regardless of public opinion, it feels like this is the kind of EP that the band have wanted to create for a while, and as a result of this, this is a band that is now very sure of what exactly it wants to be, comfortable within their newly-adjusted, shiny, indie parameters and heading in a musical direction that is sure to excite both their fans, old and new alike, and most importantly, the band themselves.