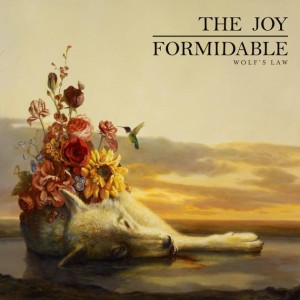 The Joy Formidable have a growing reputation in the rock world, this Welsh rock band have supported both the Foo Fighters and Muse in the past couple of years. Wolf’s Law is their second studio album following their well-received debut , 2011’s The Big Roar.

The first thing to note about Wolf’s Law is the sense of grandeur which is made apparent immediately by the string intro to the first track, ‘This Ladder is Ours’. As soon as it rises to a close the band kicks in. The next four tracks drive the album along; from the bass driven ‘Cholla’ to the punchy, hard rock edged ‘Bats’. The third song on the album, ‘Tendons’ is in a similar vein to the opening number – a polished rock song supplemented in the chorus by soaring strings. The pace of the album is broken up by ‘Silent Treatment’ but the acoustic guitar merely twists the intensity on the rest of the album into a new form. The basics of some intricate string plucking and vocals which rise and fall make this track a treat.

For all the alternative rock melodies and polished sounds nothing else on the album can quite compare to ‘Maw Maw Song’. A muted melody in the intro is quickly replaced and repeated as a bombastic, heavy hitting riff supplemented by the unusual vocal maws – you’re never quite sure if you love or hate these. Nevertheless this is the stand-out track on the album, by far the closest the band gets to a Muse sound. It is an unhinged seven minute long prog rock track with everything thrown into it including a noise rock guitar section that would have Jonny Greenwood of Radiohead grinning in delight. The album closer ‘The Turnaround’ is dominated by soaring strings and rising vocals, later supplemented by some orchestral percussion. It is at least as ambitious as ‘Maw Maw Song’ and brings the album to a close in a delightfully orchestral fashion (Muse again anyone?), albeit there’s another great track hidden at the end.

While some of the album’s highlights are stunning, the album has a tendency to drift by in sections. A number of the tracks while not necessarily filler suffer from the album’s length and sonic similarities. If listening in one sitting your interest might wane by the time you hit ‘The Leopard and the Lung’ or ‘The Hurdle’. With a track or two shorn from the running time the album might have come out stronger.

The Joy Formidable’s stadium rock ambitions are on full show here. The grandeur of tracks such as ‘Tendons’ or ‘Maw Maw Song’ could only be showcased live in that kind of environment. The textures and sounds on this album are ambitious to say the least, they have mixed some of the harder tendencies of shoegaze with stadium rock and more but the band pulls it off with aplomb. The band have a long way to go before they’re filling stadiums as head-liners but they’re certainly well equipped for it.