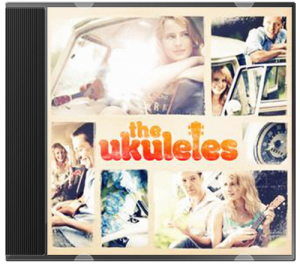 I make no apologies for stating that cover versions are for novices, wedding bands and tribute acts. So, I’m not starting out from a position of being inclined to like this album given that it is effectively ‘karaoke with ukuleles’.

It’s not the ukulele itself I have a problem with. One of my heroes, Eddie Vedder, has certainly given the instrument a certain cache recently and it works well with his distinctive style of vocal and lyric. But this is not really a showcase of ‘what the uke can do’, it is, as I’ve said – ‘karaoke with ukuleles’, where we not only have singers singing over a backing track but ukuleles effectively doing the same.

The template is set from the first song, Cee Lo Green’s Forget You. A perfectly fine modern pop song but with Green’s distinctive vocal removed and replaced with Glee-style vocals of decent quality but no real character, and of course into the musical mix is thrown the ukulele. It’s not that musically it’s a disaster, it’s just pretty uninteresting to me and to have 16 songs of the same ‘formula’ is just too much treacle. But I can accept it might be someone’s idea of fun to hear modern pop songs such as ‘Price Tag’, ‘Call Me Maybe’ or ‘Lazy Song’ or classics like ‘Over The Rainbow’ given the ‘uke’ treatment for the sheer novelty value.

I can accept that and I don’t mean to be a grump. But, there are two or three real ‘sacrilege moments’ on the album for me. Song number 2 is Rolling In The Deep by Adele and, I’m sorry, but no one should attempt Ms Adkins unless they are going to do it justice and the vocals don’t cut it. Just Wanna Play (My Ukulele) is Whiskey in the Jar with different words and the uke. Yes, it’s a traditional tune; it belongs to no one, not even Thin Lizzy, and I am probably really missing the point, but I have heard enough bad cover bands murder Whiskey in the Jar to really put up with uke’s getting in on the tired act as well.

The final sacrilege is The Cave by Mumford & Sons, who I class as one of the bright points of UK music these past 3 years. Theoretically the ukulele should work better with folk music and in the final analysis it’s not it that is the problem, it’s the twee- Glee vocals again. If you sing a cover, you have to get inside it and either match the original or at least show you understand what the writer was writing about. At no point do you get the feeling that the singers understand this. They sing ‘It’s empty in the valley of your heart’ as if they’re singing ‘let’s all go to the beach to surf’.

I’d never tell anyone they shouldn’t like a band or an album, so by all means have a listen. My opinion is this band would work best as a novelty act for the tourists back in Hawaii. Their mission statement was to bring the joy of the Ukulele to the world but I think this would be better achieved a la Vedder, with some original songs showing the instrument off in its own right, not piggybacking other people’s songs.