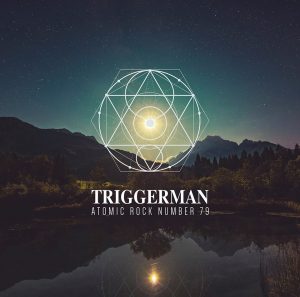 There’s a line in the title track of Triggerman‘s latest EP Atomic Rock Number 79 that goes “rock to the metal, rock to the blues”, a line that neatly sums up both the band’s ethos and their sound in one fell swoop. Oh yes folks, it’s time to get excited – NEW TRIGGERMAN MUSIC KLAXON!

Our favourite groove rockers have been around in one form or another since 2002, officially forming in 2006 and steadily releasing material ever since, from 2010’s Brand New Day to 2012’s Hail to the River Gods and, most recently, Origins, Lost Travellers & Rock n Roll in 2014. Just like clockwork, they will be releasing the aforementioned Atomic…in a few weeks, on July 29th.

The EP opens with an intro track of sorts, the instrumental ‘The Drift’. Released as a taster of the EP, it has that instantly recognisable Triggerman sound as it chugs along contentedly. ‘Stone the Philosopher’ follows, and confirms that, happily, the band have not gone all avante garde or ‘experimental’ on us: its thunderous pace, sharp riffs and vocalist Bap’s inimitable bark are all very much present and accounted for, thank you very much.

EP highlight ‘Rat Race’ is next: containing a positive thunderstorm of bass-heavy galloping grooves and ‘Sabbath on steroids’ riffs it’s an absolute belter of a track. As Triggerman have done previously, the song attacks certain elements of the modern world; specifically this time it’s the fact that we’re “running in the rat race and [you] never see the light”, before admonishing that life is short and before you know it “your race is run”.

After working themselves into a frenzy with the previous song, the next one shows a gentler side of the band: ‘Big John’ is a grinning and affectionate salute to a friend who is “built like a shithouse” and is a popular fellow. Its slinky bassline and blistering bluesy rock guitar work are complemented perfectly by the fond tone in Bap’s voice.

The closing track is also the title track, and goodness me is it a walloping number. With a scything riff that reaches deep into rock’s bluesy past, and a blazing guitar solo, it’s an ode to rock in all its glorious guises (hence the earlier quote) and is pure Triggerman in that it makes you want to bang your head and shake your ass at the same time – just try to resist; you can’t!

Having been around for over a decade, Triggerman have honed their craft to a razor sharp point, creating music that is joyous, heavy and blessed with riffs that are just stupidly good. With this their latest EP, they’ve once again smashed it out of the park in terms of production, songwriting and execution, resulting in five songs of unadulterated, rifftastic pleasure. Whatever ‘atomic rock’ is, they have it in spades.

Across The Line to celebrate 30th birthday