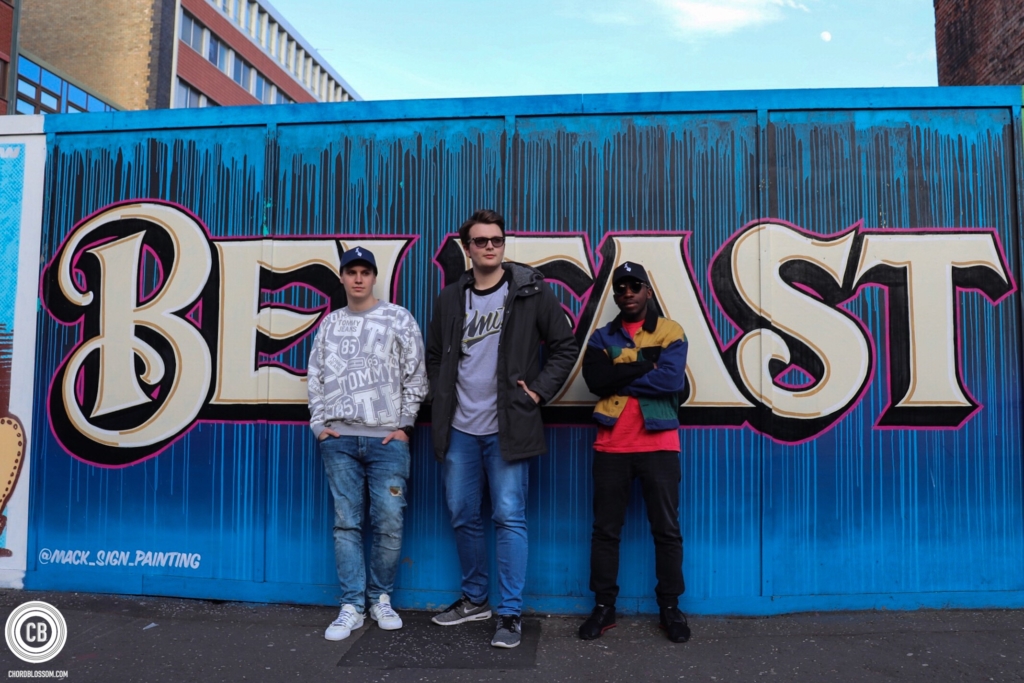 As with every movement, both process and progress for the NI hip hop scene began at the bottom.  A lack of mainstream support as forced the die-hards and enthusiasts, to the front lines, armed with little more than high aspirations and some editing software. A number of organisations began to push through the cracks but few have been on more people lips the last year than Banjaxed Records. What initially started as a drunken “what if…” quickly turned into a working relationship and then a platform behind the efforts of Cameron Campbell, Gershom Kaoma and Aaron Rankin.

A platform first and foremost, Banjaxed Record soon became one of the go-to groups for independent artists to get have their first ‘foot in the door’ moment. With the main goal to promote the scene and the artists propping it up, the banjaxed trio also aim to introduce some professionalism to what is largely a DIY scene. “We want to give (artists) access to the full package and just allow them to elevate their work to a place where it can be shown the respect it deserves” states Rankin.

Establishing the initial relationship, Rankin explained, was easy – besides having met each other through school and mutual friends, he and Campbell were already fans of Kaoma, who raps under the name GK. “I had been making the designs for (Kamoa’s) videos since 2016” explains Rankin. “we were in the studio with him working on the art. We wanted to be involved, so really something like Banjaxed was a long time coming. And then when Cameron went to Gresham with the idea of being his manager, and to me about setting up the label it just expanded from there.”

With Campbell institutionally inspired by the likes of Eazy-E and NWA (“seeing him go from rapper to businessman, seeing how he successfully bridged the gap between the two”) and Kaoma artistically so by Kanye West, J Cole and Kendrick Lamar (“Just from their standpoint in hip hop and their work ethic), the trio sought to provide something that Northern Ireland lacked. Rankin looked to the south for guidance: “We have massive rappers in Ireland now: Kojaque, Rejjie Snow, Jafaris, who are doing a great job and getting people to come together. How those guys can build something, a community, had us thinking ‘Well why can’t we do it as well?’ That’s where I would come from”

However whilst there is ‘community’ in spades, a general lack of knowledge plagues this underground scene in a way that rock, metal and electronic acts do not have to deal with, for one chief reason – many of these acts are doing things for the very first time. So why then focus on a group of artist that undoubtedly will have a more difficult time establishing themselves?

“The main reason, I think, was that I didn’t realise how huge rap was here” explains Kaoma. “It’s blowing up right now and I think people still don’t realise that. And then from going to shows and meeting people like Leo Miyagee and Jordan Adetunji, you started to see the community take real shape.” On his aspirations for Banjaxed, hs stated: “we wanted to become the umbrella for hip hop in Belfast, bring all the acts together and help them grow in a way that hasn’t been done before.”

Campbell, meanwhile, chimed in with a reasoning more born out of frustration – “Obviously we love to see the Irish acts do well, but we don’t get any major acts over here and we are suffering because of it. I don’t remember the last big act that came to Belfast.  Drake played three nights in Dublin and not one in Belfast, I just don’t see how we don’t have a stage or a say in the fastest growing music genre in the world”

Campbell’s point bares further mentioning. Dublin, in particular, has adopted the culture of Hip Hop, but so have many other southern artistic hubs such as Limerick and Cork. What then, has held the North in particular back? Rankin’s suggestion of “accents” draws a laugh, but it is symbolic of a larger issue. In the south, the accents and slang used in rap form a larger, particular identity, one which NI artists have yet to develop. “People up here cringe at how they sound up here and try and hide it, whereas someone like Kojaque, it’s a massive part of his act” explains Campbell, who feels that a lack of ownership damages the confidence and longevity of artists. “I think once some of the artists become a bit more successful it’ll change. People will turn their nose up at it a wee bit up here until then.” Kaoma agreed, telling me in his opinion that “(People) think people in NI can’t rap. That’s a serious issue and its something people genuinely believe, it’s something that will make people put it down before they have even heard it. I have spoken to friends who are like ‘Where’s this guy from?’ and I’ll say East Belfast and they’ll not even turn it on (laughs) that’s literally it.”

Indeed, while Banjaxed has turned the ears and eyes amongst music heads throughout the country, breaching into a wider consciousness has proved difficult – a sentiment both Rankin and Campbell echo. “People do not want to take this seriously and I think that’s the biggest issue. Anyone that really likes us, they REALLY like us. But it’s breaking through to the new ones or the unknowns, that’s the really big issue.”

Despite this, much of the conversation between Banjaxed and myself is optimistic. When quizzed on local talent, they quickly rattle off a number of names (Steve Locke, Jay Suttin, Jack Bashful, Leo Miyagee, Danny Diatribe, Dior Norf and Hyfin are all recommended in quick succession), and the trio remain optimistic on the future. Campbell affirms “I would say (the scene) is bubbling. I think there are a few artists here really on the verge of taking off in one way or another from what I am seeing. More and more people are doing it, more and more shows are popping up.”

“I see so many different artist with complimentary styles bouncing off each other. There is so much room, and you constantly see people cropping up in new ways. i’m really excited to see what people create from this, as I feel we are right on the edge of our own distinct style”

Banjaxed and ZOOL Records will collaborate for a special event during the Sound of Belfast festival that features some of the best upcoming rap talent in Northern Ireland.