by Anna Kelly
in Interviews

Held on the last Thursday of every month at Molly Browns in Newtownards, AER Music Club delivers the opportunity for musicians; amateurs and professionals, young and old, shy and extravagant alike to show off their skills in front of the public. AER Music Club launched on January 2014, the circular logo represent the initials of Amy Ellen Reid who sadly passed away of cancer two years ago. Her father, Mark Reid has decided to hold on to her enthusiasm and continue to support organisations that deal with that disease. CLIC Sargent and Friends of Cancer Centre for example not only support the patients and the families but also invest in the research which is very important to Mark. Last year he, his family and friends gathered thousands of pounds by doing what Mark and Amy loved best: music. The venue is situated in the town centre on the first floor, just above the restaurant and has very ‘bluesy’ touch to it. Wooden finish and red velvety sofas give an immediate feel of coziness. I had a chance to meet him there for a chat where he told me his story:

I was brought up in Dundonald and I moved to Newtownards when I got married, almost 30 years ago, so I have been here longer than anywhere else. I thought that it would be a good idea to start organising something in Ards, to create a new platform for musicians. There is a lot going on in Belfast already, I see people playing cover gigs and sometimes making a wage out of it next to songwriters with outstanding songs busking for a few pounds on the street. Amy was a big fan of pop music, her favourite band was JLS, and she would torture me by playing it over and over again.

As a teenager she would often ask about the music I was listening to and she would say “Dad what’s this? This is good!” or “ Dad, what’s this? This is rubbish, turn it off! ”. I am a child of The Seventies and I grew up listening to the rock music, Dire Straits, Thin Lizzy, Van Morrison, Rory Gallagher, lotsof Irish stuff…I got to see them playing live many times, I have a cousin who was at College in Belfast at that time and he used to come over and say ‘You owe me five pound, I got you a ticket for the gig’. During that time not much was happening in Belfast because of the troubles, the gigs were in selected venues with big names playing mostly. It is different now; when I go out and see the talent out there it feels amazing.

I always wanted to organise something new, also my family is involved with AER Music Club – my wife, my daughter Emma, my brother and my friend John. They all work very hard and do the things that I couldn’t do! At the moment the gigs are acoustic based with singers and songwriters, I have a lot of ideas, but I don’t want to force them. We want to build up the audience, let it grow naturally. We often visit a coffee shop in East Belfast where musicians bring their guitars and just play in front of the audience, I really like that, we might be doing something similar. Our main goal is to create new opportunities for the talent around us and to continue supporting our charities. Last summer we took AER Club outside the venue to the Main Square and that went well, we might be doing it again this year. There is a beer garden at Molly Browns and we were planning to get the gig there, but the weather wouldn’t let us.

Every month someone from the family tells a story about Amy so people can get to know her better. We also ask if any of the artists would arrange one of her favourite songs ‘Hold me down’ by JLS. Every person plays it differently. We have had Mandy Bingham here who sang a great cover of it. Emerald Armada and The Jepettos also performed for us alongside many other great artists. Next in line we have Owen McGarry, The Sandrunners and Randall Stephen Hall playing in April. Rory Nellis, Sam Wickens, Karl Devlin in May with Saffyre, Triona and Damien J Brennan playing in June. 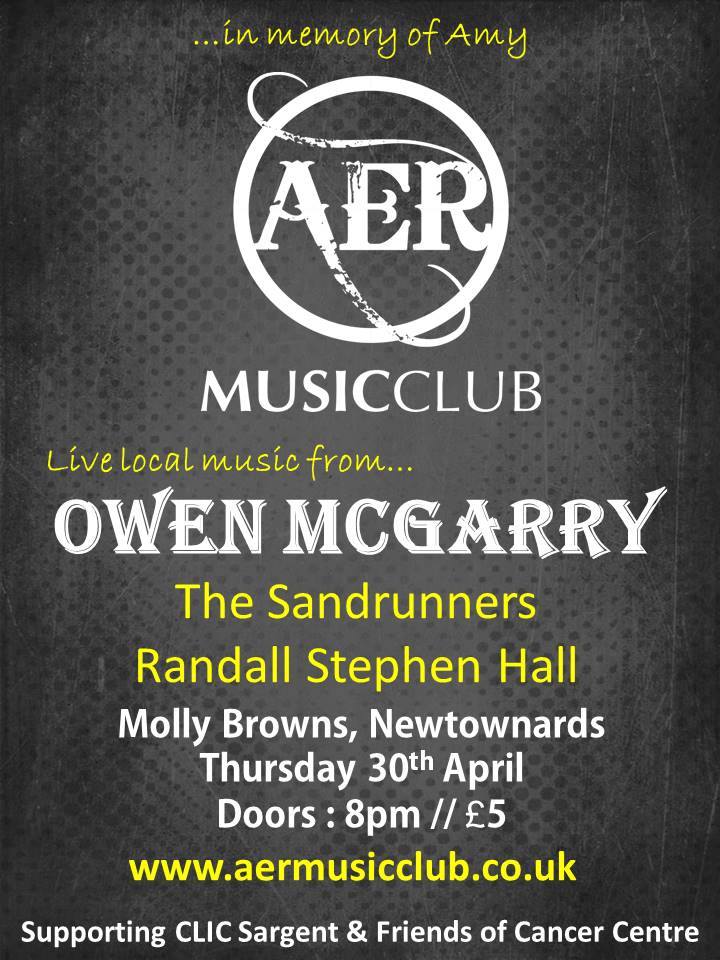 Interview: Chris Molloy and the Zang