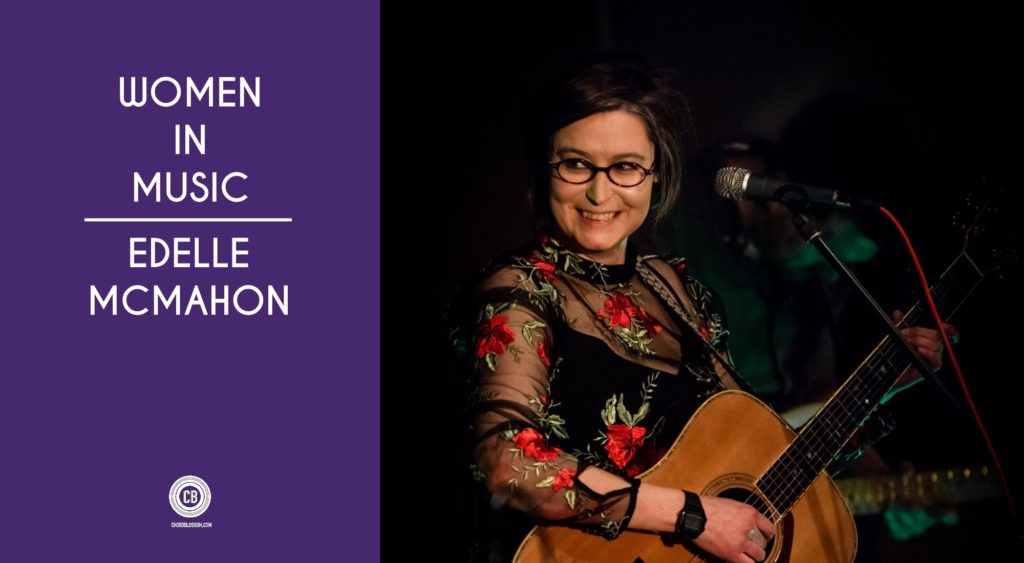 Belfast singer-songwriter, Edelle McMahon is one of the many talented women in Northern Ireland making a name for herself in the music industry. Like many an industry, music too can seem like a man’s game. All too often women must work twice as hard to get half as much recognition, and the struggle is real. Despite this, or possibly because of this there are some exceptionally bright stars to be found in this firmament. Northern Ireland has been undergoing radical perception-changing shifts in the last several years.

►Do you find that attitudes towards women in music have shifted as well?

To be honest, it’s hard to tell at this stage and it’s still very early days. Most of the gate keepers of the local industry are men and it can sometimes feel like it’s hard to be taken seriously as a fully rounded musician and songwriter, as opposed to a vocalist who sings “wee songs” (yes, this is how a promoter once referred to my songs before a gig – I doubt he would have said the same to a man). I had a sound engineer once offer to fix my pedals for me because he didn’t understand my setup – in fact he proceeded to “fix” them until I told him they were set up that way deliberately. Incidents like that are very frustrating. Maybe I’m over sensitive, but I’m not aware of my male contemporaries having to deal with the same kinds of patronising attitudes.

I think that we still have a long way to go in the music industry in general, though. Women not only have to produce the goods musically, their appearance, clothes and image are all considered fair game for commentary in ways that men don’t have to worry about. Luckily, this is less of an issue locally – it’s just too cold to be scantily clad, thank god! But there are still serious issues of under-representation at all levels, particularly when it comes to promoters, festival lineups, etc. It’s great that the conversation has started, though.

►In an article recently, you seemed to downplay your church choir start as a singer. Many singers began in the choir; legends even, Tina Turner, Aretha Franklin, Whitney Houston… to name a few. Seems like a good place to get some good vocal training at the very least.

Church choirs are one of the best places to start as a singer – you get lots of music training for free! It’s a great way to learn about harmonising and arranging songs, for example. I also picked up a lot of guitar tips from my cousins, Fabien and Gregory Murphy, in the back row of the choir as a teenager. I have always loved choral singing – there’s no feeling like it, being part of one big singing organism. It’s very different from any other kind of singing and when it works, and you lose yourself in the bigger voice, it can be magical.

►It would seem you and I have something in common. Not to put too fine a point on it, but let’s just say we both came a bit late to the party. I empathize. Not only is this business a man’s game, but often a young man’s game at that. Nevertheless, I’ve found the Northern Irish music industry to be a relatively welcoming and supportive environment. But then again. How would you describe your foray into the music business? Have you found that age or gender has helped or hindered you in any way?

That’s an interesting question. And the answer is both yes and no. Age and gender have certainly had a big impact, in ways that are both positive and negative. As I said earlier, it’s easy to feel invisible and underrepresented as a middle-aged Norn Irish woman in this job, but I have no other point of reference – I have no idea what it’s like for younger men and women; no doubt there are a lot of challenges for them that I have not had to face (let’s be honest, a career in the arts in NI is hard, no matter what your age and/or gender).

Yeah, I came late to songwriting, but by the time that happened I’d seen a bit of life and had something to say. This was not the case for me in my late teens and twenties. It took me until my 30s to start to figure out who I am and what I stand for (I was late to that party too) and that is probably why the songwriter in me was dormant until then. Quitting a secure job to follow my dream at 40 is, in many ways, reckless, I know. But coming to it at this age means that my expectations are maybe a bit more realistic than they were when I was 20. I know I won’t ever be playing stadium sized gigs and flying around the world in a private jet – so it’s not an ambition. But I think I can make a living and make some music of which I can be proud.

►Your career has evolved from singer to singer-songwriter. How was that transition?

It was pretty gradual, to be honest. I’ve been a singer all my life, but was never really involved in singing original music until I was recruited to join Jackson Cage as a backing vocalist.

When the band broke up in 2012 or so, myself and the guitarist Paul Wilkinson, started getting together to jam and eventually we started to co-write some songs. Paul is a prolific writer of riffs and melodies. So we started working on some lyrics and melodies for his riffs and the songs emerged from that. Around about the same time I started working on some songs with my good friend and lyricist, Jim Johnston. We would get together when I would have a melody and guitar part and Jim would just start riffing on whatever came to mind as he listened to the tunes. And then together we would tidy them up and make them scan musically and thematically. Eventually, I started to have the confidence to write on my own. Having said that, I still really enjoy collaborating with Jim – he’s open to all sorts of ideas and styles and is willing to give anything a go, which is a fun way to approach writing.

►What other songwriters have influenced you? What about them had the biggest impact?

A: In my early years I was more influenced by singers than songwriters, as I never in my wildest dreams thought that I’d be a songwriter. I admired singers that told their stories with emotion and sincerity – singers like Mary Black, Dolores Keane, Elaine Paige, Christy Moore. For me, singing was always about good storytelling – you need a good emotional hook and you need to tell the story well, communicating the emotions to the audience.

The impact comes in many ways – interesting ways to putting lyrics together, styles of guitar playing and phrasing, as well as interesting intervals – I have been known to pinch a good chord sequence from anywhere, if it catches my ear – even from hymns sung in my old church choir. It can get stale very easily and can feel like you’re writing the same song over and over again. Good influences can help get you out of your head and suggest ways of doing things that are different to what feels comfortable and familiar.

►Contemporary folk music comes in and out of fashion over time, yet is also a sort of perpetual presence. How does this translate into your music?

When I first moved to Belfast, having been weaned on Irish folk and trad, and singing songs by Christy Moore, Mick Hanley, Noel Brazil, etc., there wasn’t much interest in that among the other musicians that I made friends with. They were into Red Hot Chilli Peppers, Radiohead, Rage Against The Machine, Jimi Hendrix, etc. So, while I didn’t really play much in Belfast during these early years, the influence of my friends really broadened my musical tastes and introduced me to a wider range of music styles, for which I’m grateful. But the folk still had a presence, even if it wasn’t Irish folk – think Bob Dylan & Neil Young for example.

Fashion doesn’t really play a big part in my writing – I’m not fashionable and don’t hope to be. I’m essentially a folk musician and those influences will seep into my writing regardless of what’s going on in the charts. I try to write music that I want to listen to. My desire is to write music that the musicians I respect think well of. If it finds an audience then that’s fantastic!

►Your debut album has been well received, your career momentum picking up steam. An exciting time for you. Is success a motivating force for you?

Yes, it is. Paying the rent is also a big motivating force! Ha. Ha. Success is about making enough of a living to be able to keep doing this – I’m not after fame and fortune. This year I’m trying to raise my profile and let people know I’m here. I’d like to build a sufficient fan base to allow me to be back in the studio this time next year. I want to play as many live gigs as I can, write better songs and learn to be a better musician so the next album will show my development both as a musician and as a songwriter.

►Knowing what you know now about the music business, if you could go back say ten years and advise your former self, what advice would you impart?

What would I say to 30 year old me? Probably not a lot – all the fuck-ups, heartaches and frustrations are an important part of the journey. When they go into the songs, the songs are more relatable and sincere. The only thing I would say to her would be “You are a real musician, you are good enough, and it’s okay to say ‘fuck off’ to people who try to belittle you or undermine your confidence in your abilities.”

►Okay just for fun if you could have a jam session with any three artists living or dead, who would they be?

So many to choose from!! Today I would say Glen Hansard, St Vincent & the late Jason Molina. Tomorrow it might be a different answer!