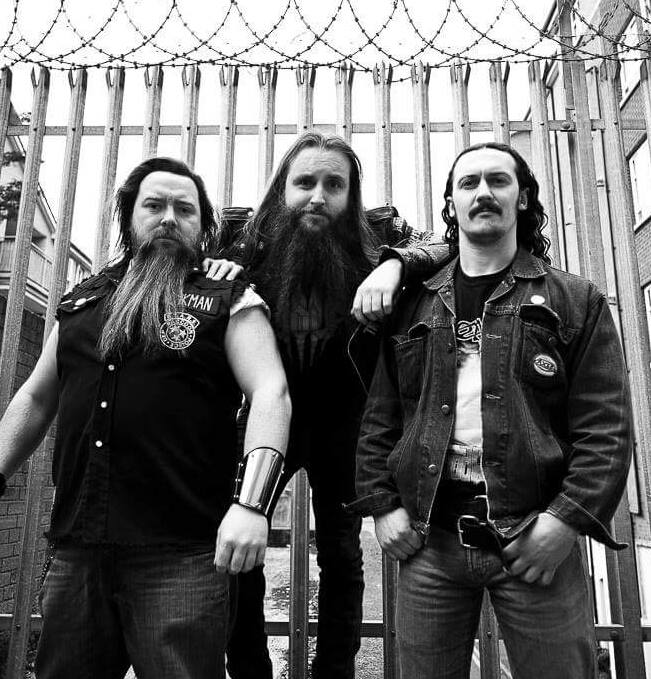 Interview: Rabid Bitch of the North at Bloodstock

On the morning of their performance on the New Blood Stage, we chatted with New Wave of British Heavy Metal-influenced trio Rabid Bitch of the North about nerves, favourite gigs and getting the most out of a trip to Bloodstock.

►Chordblossom: Welcome guys! So this is your second time playing at Bloodstock (they played the Jagermeister stage two years ago). Is it more nerve racking, or more exciting?

Chris (drummer): I personally am a wee bit more nervous about it, because it’s a bigger stage and bigger responsibility. And it seems like we have more to prove on the bigger (New Blood) stage, unlike the Jager stage which was more of a ‘walk on and the crowd was already there’, whereas this time we have to draw a crowd in.

Gerry (guitarist): It’s a more prestigious stage and slot, and it elevates us. So yeah, I feel the pressure. I don’t want to f***k it up!

Chris: If you’re not nervous and feeling the pressure…I mean, it feels like an honour as well as being nervous (laughs). I’m afraid of letting somebody down.

►CB: I’m sure you’ll do fine! Things are moving for the band now, and going really well. You’re on an upwards trajectory now: is that exciting as well?

Joe (vocalist/bassist): It’s been two years of slow, gradual progress for the band, with the gap where the record was held back (from release). It’s all good: the album’s on the way finally, we’ve this, we’ve European dates in October, No Sleep Til Dublin in two weeks…and we’re already making plans for next year with some dates abroad – even further this time.

Chris: In the meantime it’s the hard work that (producer) Gerry has to do, mastering and mixing the album.

Joe: We’re very busy; big bands can take afford to take gaps and then spend a few months in the studio. We’ve actually had to fit it in this year: because we didn’t know when we were going to get time to record we’re now having to squeeze it in between shows! So we’ll get a month here, two days there…so we’re thinking January for it to be done, dusted and sent off to be released. We’ve pretty much agreed something with Alone Records (who released their earlier material) at the minute, but don’t take that as one hundred percent: they were interested in dealing with us again. We’ve the album name – Nothing But A Bitter Taste – and yeah, it’ll hopefully be out in January.

Chris: Alternatively, in brackets ‘I can’t Believe It’s Not Butter Taste’ (laughs). That could be on the inside sleeve!

►CB: There’s your sponsor! So where do you see yourselves in a few years then?

Chris: That would be a dream…when we arrived on Thursday night, Psykosis were playing to an absolutely busted out tent, with people swimming around the outside, too. It was just…majestic. We’re so happy for them to have gotten that, it’s really nice, but I want that now (laughs).

►CB: Spurred you on?

Chris: Definitely. And it was the first night, you can just enjoy yourselves for the next three days. Very jealous of them (laughs). Because we’ve had three days of going “argh! Three more days! Two more days! One more day!” And now it’s finally happening.

Gerry: On top of that, too, maybe have another release out, and more touring. And playing further afield.

►CB: So would it be an ambition to headline Bloodstock one day?

Gerry: I’m not even thinking about that, personally (other two agree).

Joe: We’re not really too unrealistic. We don’t say sh*t like that (laughs). At the start you joke about stuff like that, but now…baby steps. That’s the reality of it these days. We think “we could do that, or that”. Like Siege of Limerick: that opportunity came up, and we were ready for it (the band replaced Stormzone, who pulled out last minute). We never would have thought we’d headline Siege.

Chris: And we assumed, when we were asked to play, that we wouldn’t be replacing Stormzone; that we would be moved to a more suitable time slot, and then we were told “no, you’re playing where they were”. And we were like…ok (laughs).

Joe: That’s how things really happen. You can’t schedule it, like “these guys in four years time will be in that one, or that one”. Normal bands split up within four years: we won’t be split up. We’ll be on a bigger stage.

►CB: So making your way up, rather than ‘boom’ straight way at the top?

Joe: Yes, and we’re happy with that pace.

Chris: You have to work for it. Because if you’re just handed it without working for it, it’s not fair, it’s not honest, and you’re not going to last, either. There’s no substance. And you haven’t earned it, you don’t know what it’s worth. Unlike us: everything we’ve got, we’ve worked hard for – where we’re playing, we deserve. Because we’ve worked and given so much. We’ve been playing all the time: a few gigs every month, steadily, over the years. And we know what it’s worth, and we respect and appreciate it. It’s hard work, but we’re happy doing it.

►CB: Going back to Siege: you’re practically the house band there now! Do you keep going back purely because you enjoy it, because it’s a good festival to play?

Gerry: It’s a great festival to play. Not only because it’s the biggest festival in Ireland, but also because of how well it’s attended. And also if you’ve played Siege, people know that you’re worthy enough to have been asked, which elevates your status. And now that we’ve played it so many times – we’re playing it again in October – we’re so honoured. And we really do love Limerick, and really can’t say any more about how great a festival it really is.

Chris: It’s the best in Ireland; it’s the best run festival – Tall John is great at looking after everyone – and it has the best crowds, the best metal fans. It’s my favourite place.

►CB: It is a great weekend! Back to Bloodstock: who have you seen, or are looking forward to seeing?

Joe: For me, I’ve seen who I wanted to see, which was Twisted Sister.

Chris: Twisted Sister were immense. I’m looking forward to seeing Anthrax, and the rest of the weekend has been great. I’ve seen as many bands as I possibly can on the main stage, as well as the other stages throughout.

Chris: “Wait, I can hear somebody soundchecking! We must go!”.

Joe: “Someone’s playing music in the car in the campsite! What’s that album?”.

►CB: Ha! On that note: enjoy the rest of your festival, and good luck for your set!

All: Thanks very much!