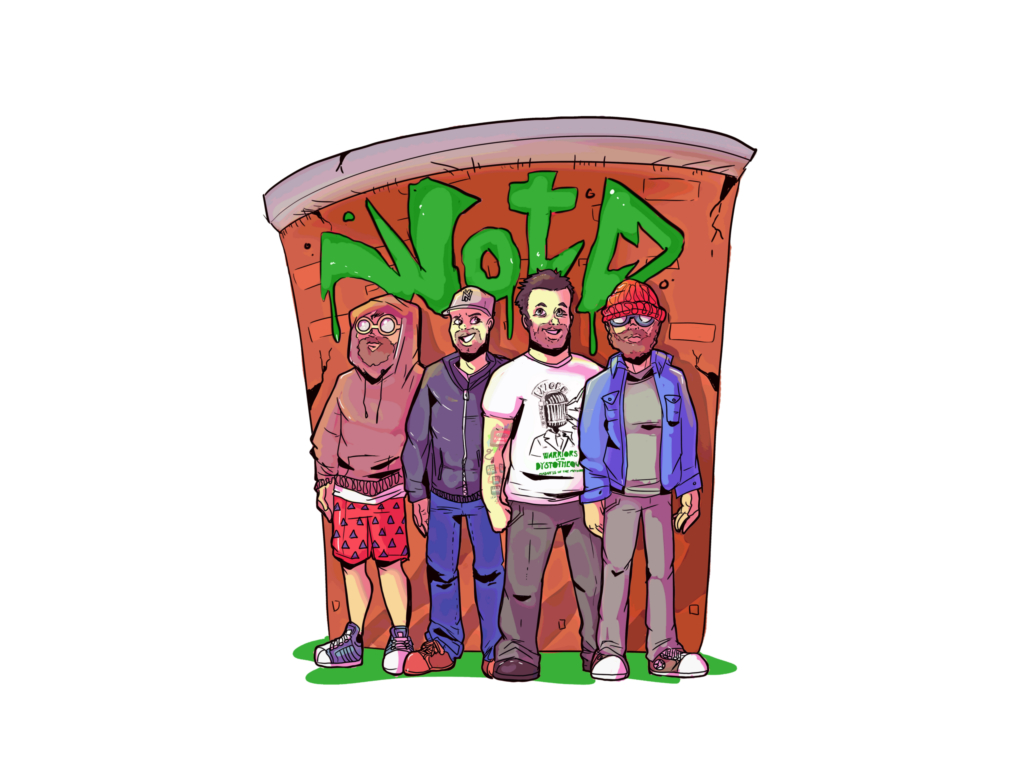 Interview: Warriors Of The Dystotheque

For most musicians around the world this global pandemic and series of civil uprisings have halted their creative work, or at the very least completely changed its process. This is not the case for The Warriors of the Dystotheque. The group made up of Derry’s Jonny Mac, Sean Graham from Coventry, and brothers Nylon Mike and Nick Rufolo from NYC have been collaborating exclusively online since 2014. The music produced is inventive, genre defying, and most interesting in 2020: global. Entire albums have been released without a band member sitting in the same room. It’s influenced from jazz, funk, the Rip-Hop scene and Breakbeats but nothing is really off the table.

“We are a self-professed ‘Anti-Social Network’ of musicians,” Jonny explains. “So you could say that [we] were well equipped for the current climate’s creative confusion.”

They’re well equipped for more than just the pandemic induced climate. The lockdown set them up to release ‘No Borders’, a single which while being an electronic jazz instrumental, speaks volumes in terms of the political climate. With a band name like The Warriors of the Dystotheque it shouldn’t come as a surprise. As soon as the lockdown began Jonny Mac seized the open schedule to start prepping for their second album as a message to world leaders.

Brexit and the Tories, Trump and the Rise of the Right, inspired their March 2020 release, ‘Thou Shalt Not Follow’. ‘No Borders’ would be the next song to continue this conversation. The band found connection with DJ Howie B through their similar feelings on the topic. Like Sean Graham, Howie B also splits his time between the UK and France.  Jonny Mac and Howie B originally met while working one remixes for another artist (Lisbon Boy).

“About 18 months passed before I got chatting to Howie and we struck up a friendship swapping music and just having a laugh.” Jonny Mac says. “We’d never really chatted about working together until this pandemic happened and we thought hey let’s collaborate.”

‘No Borders’ is the idea that everyone should have the right to free-movement regardless of colour, creed, or religion. It was built by Jonny Mac laying down some drums and synths and then like layering an online cake, it got sent to every member of the band and Howie B multiple times to add in anything from trumpet and trombone to Marimba and bass. It is an electronic synth mix that oozes lo-fi energy. The Black Lives Matter protests which spread as this song was being created just added another layer, starting with US president Trump’s reaction to the protests which spread globally.

“He’d sooner send childish and incedury tweets than sort out the problems caused by his racist police force,” Jonny Mac says. “He’s added the fuel to start those fires and he couldn’t care what the outcome is as long as his gun toting followers are hyped up.”

The protests made their way to Northern Ireland and while the eyes were on the USA, Derry was quick to gain media attention for their rapid response to stand with Black Lives Matter. “The people of Derry have stood up for inequality for decades since the civil rights marches to LGBTQ right through until BLM,” Jonny Mac explains. “It’s something that runs deep in the city, there’s a passion and it’s not just the older generation, it’s the teenagers now bringing the fight and hopefully they can help right a lot of wrongs globally.”

The protests inspired the group and Howie B to donate 100% of the profits from “No Borders” to Black Minds Matter in the UK. The non-profit works to ensure that mental health services are made accessible to all Black people in the UK, from therapists and professionals who understand Black lives.

“ I think therapy is a brilliant thing to go through,” says Jonny Mac. “I’ve went through some intensive therapy over the last 10 years and it’s definitely helped me but I’m a white guy who’s was treated by a white therapist. I’ve heard from a few of my friends that when they went to therapy they felt like a lot of their problems and the microaggressions that they face weren’t understood by white therapists.”

The single is meant to bring about change. It’s a core part of the music The Warriors of the Dystotheque have been creating since they came together six years ago. They create music meant for protest, which is often mistaken to just define the “Woodstock” types, but Jonny Mac knows that protest music defies genre. “Protest music is nothing new,” he says. “Whether it be from an acoustic, distorted guitar or an electronic artist.”

One of his favourite examples are the clear messages that Rage Against the Machine have had. From their origins in the 1990s the band has been protesting against the capitalist system and governments which fed into the problematic system. Recently the lead singer Tom Morello reiterated their already open views, to the surprise of many right-wing Americans. “Some of the same idiots who blindly vote for Trump have been losing their s**t about Tom Morello speaking up,” Jonny Mac says. “What Machine did they think they were Raging against for the past 30 years.”

It’s the same machine The Warriors of the Dystotheque are fighting against on their uniquely digital global scale. From the New York City Stonewall Riots contribution to the growth of electronic music in the 60s to the anti-Thatcher UK Acid House scene in the 90s, electronic music has grown to be one of the most popular modern genres while being rooted in protest.

“The spirit of Rave was anti establishment Peace & Love just like Woodstock in years gone by,” Jonny Mac finishes. “We’ve had years of parades like The Berlin Love Parade and Pride that have brought about change and more tolerance, it’s nothing new and it won’t be going away anytime soon.”