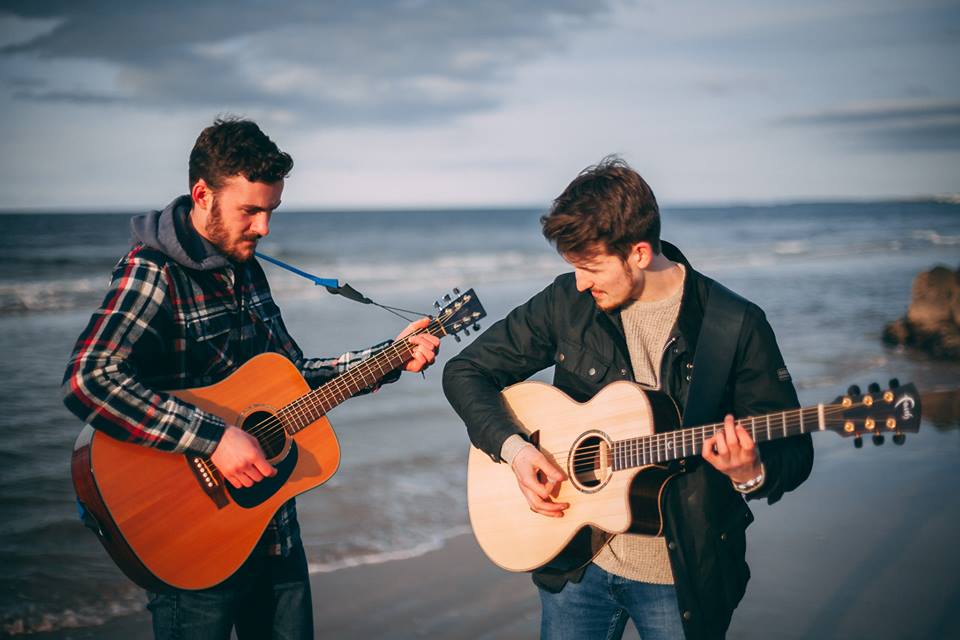 We wanted a name that addressed the fact that we had been playing together for years getting across the idea of time going by. Eventually the saying “many a moon” came up and rolling off that we ended up with “Many a Son”. Once we came up with a logo to go with this name we knew it was right for us.

We had both been playing music from our early teens and slowly got more serious about it. It wasn’t until we played together many years later that we thought we could do something real with it.

We’d describe our sound primarily as acoustic and ambient with a folky heart that’s got more modern sensibilities. We try to keep our sound unique and real, with an honesty that shows our chemistry as musicians.

We had played privately in Crusoe’s Castlerock to launch Many a Son for family and friends, but our first public gig at ‘Pear Tree’ – a cafe in Coleraine stands out the most. As we began our first set a fight that broke out directly outside the large windows beside us, it was rather hard to concentrate and everyone’s direction was turned to the fight.

So rather than play through the set we went instrumental and started playing ‘Eye of the Tiger’ to make light of the situation. Thankfully everything was dealt with appropriately and swiftly and we were able to get back to the set and had a great time.

We have two highlights that we’d like to mention – first was the first time playing in Mussenden Temple, an area very special to us and our music, specifically our song ‘Lion’s Refuge’. This event was also the day we sold our one-hundredth ‘The Blue’ EP, a proud day for us both.

Secondly we absolutely have to mention our EP launch for ‘The White’. We had the honour of being able to launch in the Arcadia, Portrush. A beautiful venue that has views out to the sea and is well known for its ties to music and arts. We managed to pack the place out and sold out of our new EP’s on the night. There was a particularly great moment, however, as the crowd started to sing along to ‘Run’ by Snow Patrol with us. We’ll never forget it.

As of yet a true low point for us is hard to tie down. Although we’ve had a busy year, we haven’t been around very long, however, we do find that background stuff like promotional and organisational work can be challenging – But we’re thankful that that is the least of our worries.

▶ If you weren’t musicians how would you spend your spare time?

Jordan rarely puts the guitar down, always playing at home or at church, but would probably be found raving about conspiracy theories or trying to sell you a new pair of shoes. Ross would most likely be stuck studying medicine at a desk 24/7.

Switchfoot because they’re amazing, diverse and have an incredible live show. And they may be Ross’ fave band.

Snow Patrol because they’re local legends, great songwriters and we cover a few of their numbers.

Mumford and Sons because we love them. Their ‘Sigh No More’ album has a special place in our hearts and they’re class.

Busted because they’re Busted and they’re back in full force so that would be fun. And Jordan used to be in a pop punk band.

Hudson Taylor because they’re great, they’re also a duo and they show us that we need to get better at harmonies.

Oh you said 3, we got carried away. Sorry.

Don’t know if they are that strange but we’d go for Just Roll cinnamon rolls, a must for practice.

Other people to compete against on Mario Kart, and probably lose to.

We love playing music and sharing our songs with people, as cliché as it is. But it really as simple as that. We have a long list of songs we want to record someday and a vision to what that looks like, but we take each step one at a time.

For us as Many a Son, we couldn’t pinpoint a musician that has been our biggest inspiration. We each listen to very different styles of music from each other, and so playing together creates something different.

Regardless of music, our greatest inspiration comes from our Creator and His creation – especially the North Coast.

Definitely Andy Rogers – We are thankful to share the same producer as him and he is a lovely guy and great musician. We owe a lot to him and know he’s got some really exciting stuff coming soon to do with a cave!

Promoting our new EP and gigging as much as we can, we’re planning to be breaking into Belfast and other places rather than staying so close to home this time round. Other than that we’ll be working on the next EP, which will be the 3rd EP of a potential five in the pipeline (a long pipeline).