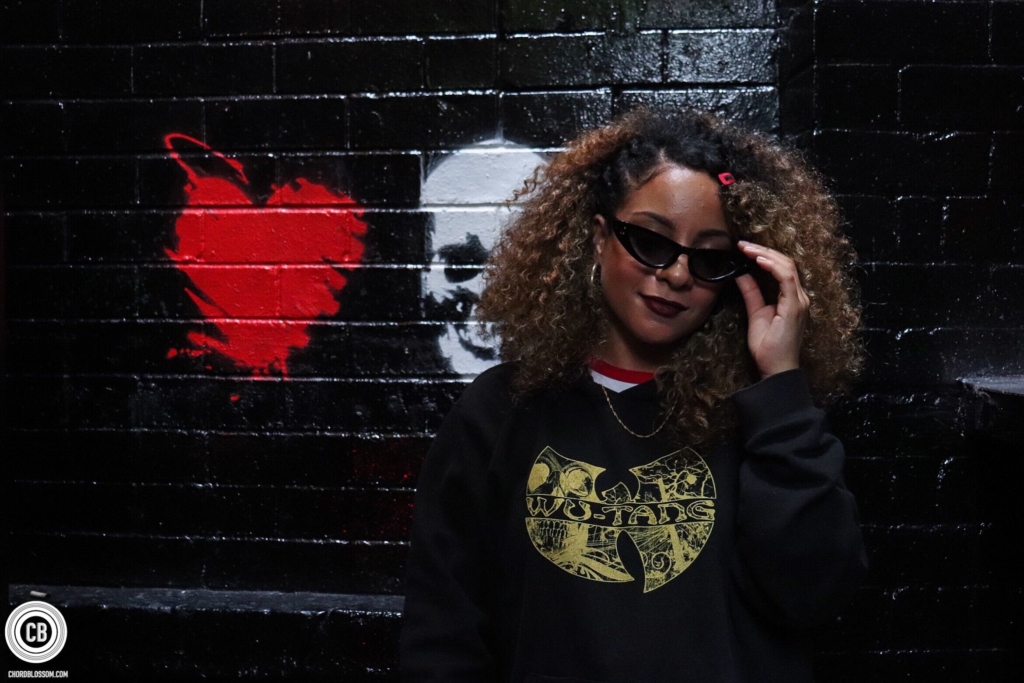 With the rising significance of Rap and its affiliates in the North, a new breed of creative has also emerged. A wave of performers, entrenched in the halls of trap, rap, lo-fi beats and more, have surged forward in an effort to make themselves known. Belfast is changing and thus it only makes sense that the creatives change with it. With an overload of indie, alternative, folk and rock, many of these artists are presented with a dual edged sword – breaking the mould and convincing long time promoters and venue owners to take a chance on their music is no small feat, but they also have the opportunity to be trail blazers, innovators, and the names everyone will remember when discussing hip-hop in the north.

One such performer is Dena Anuk$a, a rapper, singer and DJ who boasts a sound as colourful and diverse as it is fresh. Incorporating elements of neo-soul, R&B, lo-fi grooves and rap, Anuk$a is a product entirely of her own creation. First cutting her teeth during rap battles with her sister as a child, she struggled to find her voice while moving between locations – “I was also living in a different country at this time so it was hard to put myself out there. When I moved back here I quit everything I was doing and dedicated my time to making music because that’s what made me happy.”

Inspired by the likes of Bob Marley, Rihanna, J. Cole (“He was my number one rapper. Just his lyrics”), Tyler, The Creator and Chance The Rapper, Anuk$a’s sound has a diverse horizon. It was enough to catch the attention of GXRL CODE, a collective in the south, whose founder MONA-LXSA encouraged her to establish her own chapter in Belfast. “There was a gap here for females who do hip hop here – so I launched it a while ago and the girls I’ve met since then, DJ’s, rappers, it’s been incredible.” Inspired by her own insecurities and nerves from trying to perform in Belfast in the past, Anuk$a looked to provide other women performers a platform. “Coming out in Belfast – its so judgemental, even having hair like this or dressing in a weird outfit, people just stare at you. Thats the main point of GRXL Code to have a platform for girls in hip hop but also in all places in the creative industry – we have skateboarders, a wrestler. Growing GXRL CODE is one of my goals.”

It’s not difficult to see the appeal of the collective. Women in hip-hop are a criminally undervalued demographic world wide, and in a fledgling scene such as Northern Ireland’s there is often little to no industry support save what they can negotiate for themselves. “Being one of the only female rappers, there’s not enough motivation for up and coming artist to put their stuff out there. Makeup artists have lots of inspiration why can we not do that for hip hop artists?” With a lack of local inspiration to call upon, Anuk$a preaches the importance of looking inward for motivation. “You have to remember is that you can never lose confidence in yourself here. When you start doubting yourself, people here are judgemental so you just have to put yourself out there and be a boss bitch in everything that you do and not care what anyone else thinks. There ARE supportive people here. People who don’t want to follow the same commercial route as their friends, techno music and stuff. Some people want something just a little different. but as long as you’ve got confidence then who gives a fuck what people think.”

“Confidence” being the keyword and ingredient to Dena Anuk$a’s music, which is far removed from the discography expected of a Northern Irish artist. And yet, people have taken notice. Her single ‘Away’ has had several plays on Across The Line, while releases ‘My G’ and ‘All My Si$ta$ Got Friend$’ made it to the long list for the NI Music Prize’s ‘Single Of The Year.’ But in an era of dwindling physical sales and soaring streaming numbers, often the only way in which a new artist can make an impact is through their live shows. Thankfully, responses have been swift and loud. “My performance at The Barge, that was an unreal night. I was shook, I’ve never had a night like that. It done wonders for my confidence. There were a lot more people who were coloured at my event, I think they appreciate it a bit more, they like it a bit more. Like if I perform in the Oh yeah centre and its all rock bands, and the rapper form Egypt gets up everyone is just like “cool” (laughs). But at the barge, I just saw lots of people that I know from the scene in general, not just coloured people, people who like hip hop music. I think that’s why it popped.” The idea of such a night as little as two years ago seems unrealistic, but Anuk$a has noted a shift in the crowds. People are rooting for the pioneers and underdogs in a way that was unheard of in the past – “You can create your own sound, take over, do events and cater to this growing audience here.”

And while the indomitable march of change may make it easier in years to come, Anuk$a has no interest in waiting. An alumni of the Oh Yeah Centre’s ‘Scratch My Progress’ programmes, she spends most of her time jumping between recording, networking and running her own PR campaign. “Its not enough to just make good music, you have to put in the time with your press. It takes so much time but it does pay off in the end” she stresses, “and that growth is important. Putting on more events, putting Northern Ireland on the map. Opening the eyes of more venues and artists to see what we can do here. Theres more cultures down south I think Belfast will get there and be like that. But until then I’m just gonna go back to my room, keep making music. That’s the beauty of living here, because I can create my own scene here. Theres such a market here for that.”