A veteran of the infamous London grime scene it wasn’t until 2011 when Wretch 32 finally came to prominence as a mainstream MC. Scoring three consecutive top five hits that year with “Traktor”, “Unorthodox” and the number 1 single “Don’t Go”. Now respected as one of the finest lyricists in UK rap winning countless awards, this year will see his stock rise even further with a follow up to “Black and White” on the way. Set to be apart of the cavalcade of massive artists playing Radio 1’s Big Weekend this month, we chatted to Mr Sinclair to get an insight into life as Wretch 32.

► So how has Derry been treating you so far ?

Wretch 32: Derry’s alright you know, the people I’ve met are really enthusiastic.  Everybody has greeted me with a smile and been very respectful. It’s a cool place.

► Your new single “Blackout” was released this week. Does it feel good to share the music you’ve been working on?

Yeah it’s a great feeling man, the week of release is always so crazy though. You just sit there looking at iTunes refreshing your laptop. I must of refreshed it about a million times just to check if we were going up or going down. We’re really happy with the results so far.

► One word which definitely comes across in the track is growth do you feel that this song signifies that this is Wretch 32 mastering his craft?

You know I feel like I’ve learnt so much and  that there’s so many things that I’m able to do that I just haven’t tried. A record like this is something fresh for me and growth is definitely a key word which describes the campaign right now. I’ve grown as a person which means I’ve got more things to say. Even my vocab has grown so growth is a good word right now.

❝ I’m not just somebody that comes up with one record, I’m not a one hit wonder.❞

► What was it like being on the set for your new video, the lighting definitely seemed to not only separate it from your own videos but others artists as well ?

It was cool. We just wanted to make a place that just doesn’t exist but looks cool enough to want to go to and zone out. I think that vision was brought to life. It’s the first time I’ve worked in an indoor studio and seen a rain machine so it’s pouring down with rain in the studio and it was definitely something where everybody who participated enjoyed it. Not all the videos are usually like that but this one was sweet.

► You’ve got Shakka on the hook who is an amazing artist – who else can we expect to see you teamed up with in future projects ?

We’re about to work with Jacob Banks who’s another new guy and also George the Poet.  These are guys that I’m really excited about musically, lyrically and what they do is just second to none. I’m obviously excited about their projects as well as my own.

► How does it feel returning to Radio 1’s Big weekend?

It feels incredible man. Once again the word growth comes into mind because it was the first festival I had ever been to full stop, so going from not knowing what to expect on a small BBC introducing stage – which was a great platform – to then coming back and performing the main stage is a great feeling!  For me it’s a great feeling to know that not Radio 1 stuck with me and that I’ve stuck with myself and pushed myself to make sure I come back. Now I’m on the biggest stage after starting on the smallest so it’s a great feeling .

► Do you work with your own band in order to perform your sets live?

Yeah I work with my own band. We try to bring our records to life and try to give it a new dynamic because there’s a difference between listening to our record in a car and  hearing it performed live. We want to create a different feeling so that  the records sound a lot more aggressive when they go live.

► Will this be the first performance of the new single at Big Weekend?

It will be my first live band performance of the single in front of an audience so yeah we’re really looking forward to it. We’re in rehearsals this week to make sure we have a killer set so you know it’s good times. 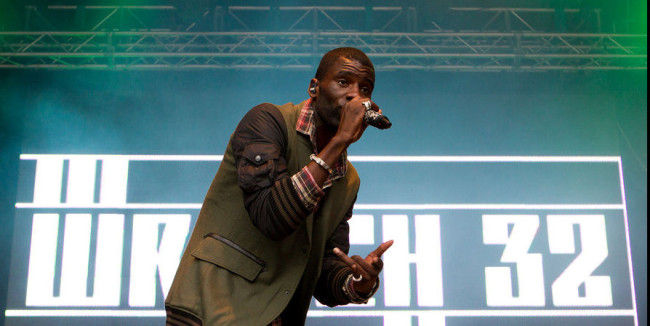 ► How do find balancing the jobs of being a dad and Wretch 32 ?

It is difficult at times because my kids are young so their both sleeping by the time I finish work. So unless I pick them up or take them to school it is very difficult to spend that quality time. Definitely a lot of Skype a lot of phone calls but you know the kids are good kids man and they understand.

► What is your approach when taking your music to America ?

Different things are going to work for different people but one thing I want to do is that I want to break in American in the same way which I broke here, which was really organic. I broke being known for putting out good CD’s, so I wouldn’t want to go over there as a fresh person with just a single. I would like to have a back catalogue and for them to understand I’m not just somebody that comes up with one record like a one hit wonder. So we’re still finding the right strategy to go out there and attack it because obviously it’s a massive place so it’s like “where the hell do you start?”. It’s definitely on my mind.

► Are their any future plans to work with The Movement again ?

Yeah always looking to get back in with the boys and work on some stuff because they were some of the best recording times of my life! Along with it being some of the most exciting and most interesting times because it’s so competitive in a room with those lads. Whenever we can get back in you know.

In 2013 look out for the new album, look out for any tour dates that were doing and look out everything which has come from the camp which is called “Renowned”. You know that’s what we’re representing right now and it’s just about good music man and good positive vibes!

And So I Watch You From Afar Begin US Tour