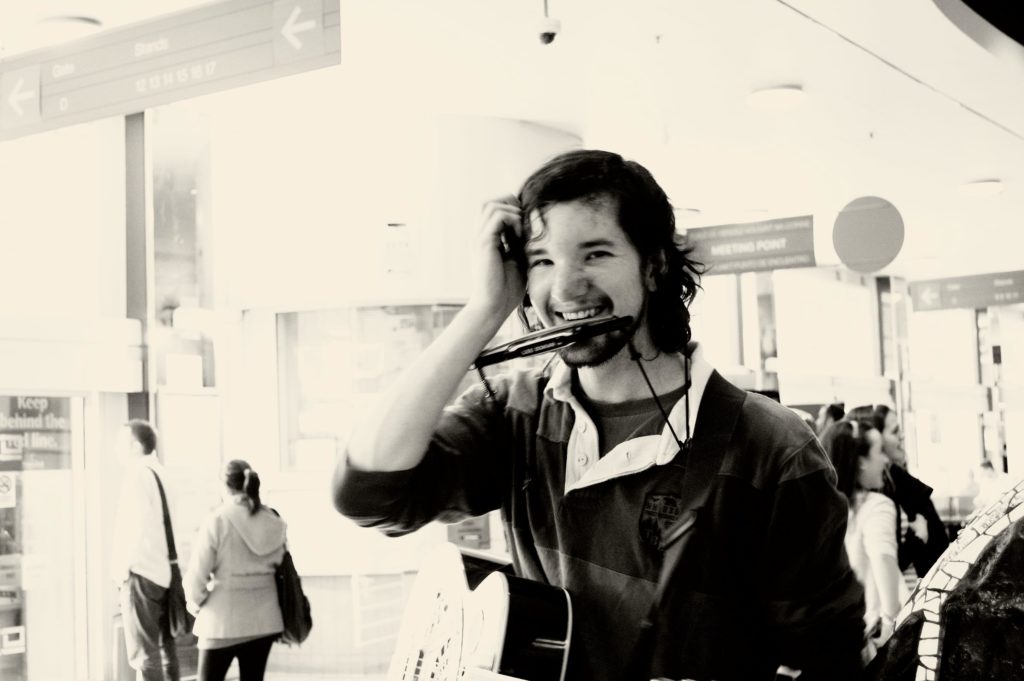 ▶ Tell us about your Artist Name

Really ‘Dolbro’ Dan? Talk about making a stick for your back. I dreamt it up – complete with typo – when I was a naive, young fledgling ‘folk-singer’ and have spent a decade explaining what it is and how to print it onto posters! I am happily resigned to the fact that it’s like a bad Username that people know me by, but I answer just a well to Dan, Danny or Daniel Mulligan. Take yer pick.

▶ When did you first start playing music and how would you describe your sound?

I started making ropey pop-punk aged 17 with friends from Ards. We gigged around Front Page / Giros with the garbage band name ‘Grabbit Phonya’. We used to play together with Pocket Billiards. Those were mad wee shows. We all lived in a punk house for a while until finally I moved out and bought Freewheelin’ Bob Dylan around 21-years-old. There’s only so much punk music you can listen to in one day.

At the start I definitely aped Dylan (who definitely aped Guthrie). But it allowed me the option to be that sort of character so I could sing those kind of songs. I had a phase of writing ‘protest songs’ shortly after seeing Zeitgeist, imagining what it would sound like if ‘Hard Rains Gonna Fall’ was written today. After that I lost the head completely. I went off to India and got lost in the wilderness for a couple of years. In the end I had another album ready and finished (in my head).

I came out swinging in 2007 with a full album of Dylan knock-offs called Singin’ Homemade Music. I tried following that up with a botched attempt at a purely analogue vinyl release called Paranoid[?] Protest Songs. The obsession to fund and print a record nearly ended me. Eventually it surfaced as a ‘Tee Pee’ (T-Shirt and EP combo!)

After that I had a run of Talkin’ Belfast Bike Crash singles (2011) and then held off putting anything out to work on a second album. I’ve recorded session vocals for a couple of projects – EPs, albums etc and worked with Amorphous Androgynous (2012) on a remix which never came out.

I released my first ‘digital’ single, Something For Me when I signed up to PRS for Music in 2013. I bought some new strings and a 10p mix with the royalties. Then in 2016 I licensed ‘Richard Cory’ by Simon & Garfunkel to release as a single. All legal and above board.

This wasn’t really my gig, but I was asked to perform with Amorphous Androgynous who were headlining at a festival in Finland. They did a remix of ‘Falling Down’ by Oasis so I was bellowing that at full throttle whilst trying to put my foot through the stage. The whole experience was amazing from start to finish.

Getting up on the main stage at Killinchy’s ‘Pigstock Festival’ was one of those highlights and low points all rolled into one. Acoustic guitar through speakers 12 feet tall. Farmers could hear me for miles around! They put me on two before the headliner as an unlisted ‘secret’ act, just to waken people up a bit. Get them out of their tents. It went down really well but then all the reviewers must have thought I gate-crashed because they mentioned every other band but me. Ho hum. Mustn’t dwell on it.

I do a lot of creative stuff around my music anyway. Animations, videos, website, artwork, t-shirts etc. I studied that at uni so basically anything I can do myself, I will. I really enjoy that side of things, plus it would cost a fortune if I had to out-source it all. If I wasn’t making music I would definitely default back to visual design.

Since we’re in the realms of fantasy I’d ask my favourites Pearl Jam, Mudhoney and NOFX to tag along. I’d just dander on stage cool as you please and do guest vocals, and give people high fives. Then I’d wake up and have tea and cornflakes.

I know there’s been a big vinyl revival so this sounds hipster as hell, but I want to press a 12″ LP. My goal since like forever has been to take a record out of its sleeve, drop the needle and hear songs I’ve written playing on a turntable.

▶ Who has been your biggest inspiration as a musician?

Probably the aforementioned Pearl Jam, Mudhoney and NOFX. They all seem like they got their heads screwed on. They treat their fans well and are consistently good at what they do. I know as a singer/songwriter I should be name-dropping acoustic players but my go-to has always been dirty old grunge or punk, especially for their do-it-yourself ethic.

Yeah sure. King Cedar (Stephen Macartney formerly of Farriers) is on the ascent – another Bangor lad like myself. I hear rumours in the wind that Ethan Hanna is recording an album. I just got an album by Haunch after hearing their single ‘Twitching’. John Andrews just released a belter called ‘Love Letter’. And of course I’m always rooting for Gascan Ruckus, Junior Johnson and ‘Acoustic’ Dan Gregory to keep on trucking.

With my sleeves well and truly rolled up again, I have just launched a crowd-funded campaign to print 300 copies of my album onto vinyl. Still need to find another 200 hundred record collectors from somewhere. This album, ‘Folk Dope’ has been brewing for about 3 years and I’ve roped in some great players along the way to help me make it: Hammy Hamilton (Foy Vance), Dean Stevens (The Tragedy of Dr Hannigan), Edelle McMahon, Junior Johnson, Stephen Macartney and the late, great Jackie Flavelle to name but a few. At the moment I’m up to my eyebrows – finishing mixes, putting out singles and posting ‘engaging content’ on social media…