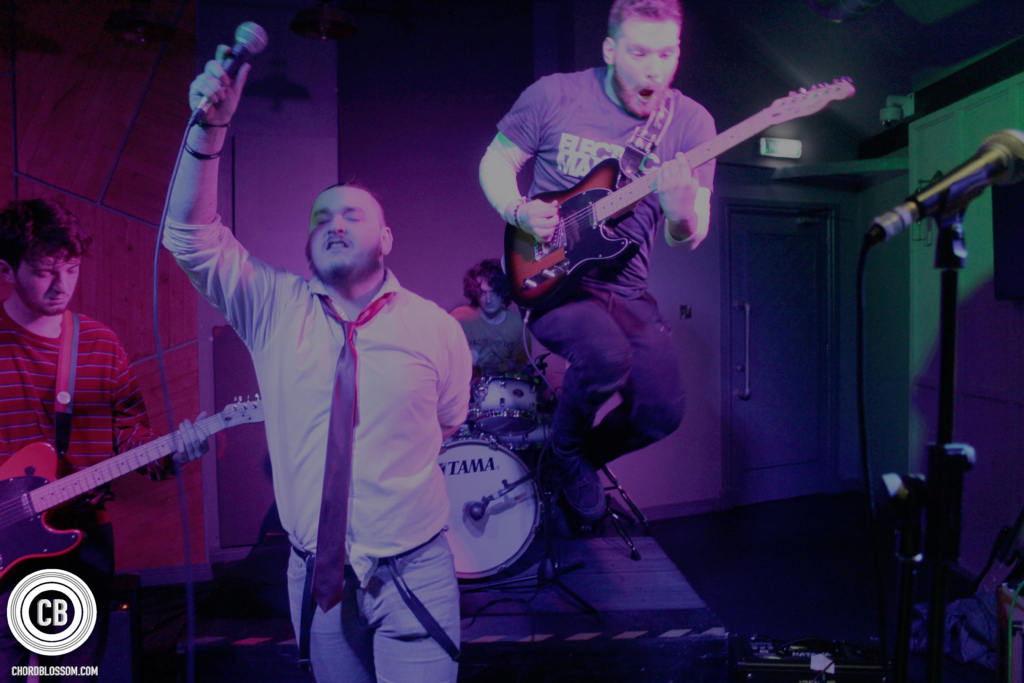 Charity Shop Vinyl, a 5-piece indie rock band, have been on a constant rise throughout the year. They are facing their third sold-out headliner show of the year, launching their EP ‘Waking up the Neighbours’ and bringing a promising line-up of local Derry talent to the Nerve Centre.

The tone of the room went from 0 to 100 as Zaebius hit the ground running. Their fast driving punk sound has been giving them a great name in the local punk scene as they riled up the crowd to bounce along with their new single ‘Backstop’. Also with gracing us with a new song ‘Choice You Missed’ which can soon be enjoyed on their EP.

Afterwards, Villa in France opened their set with a well-received rendition from ‘Eye of the Tiger’; it was a nice contrast to the opening act as Villa in France brought an uplifting and pop-y tone to the mood of the room. They then went on to make the ground shake in an excellent indie rock fashion and won over many hearts playing ‘Found a Way’ by Drake Bell, definitely resurfacing many nostalgic memories for the young crowd. They finished with a beautiful original ‘1990’, with heartfelt lyrics and vocals bringing a slower pace with a calm atmosphere to bring a close to their set.

Vanilla Daysare another up and coming local band who have been gaining a great reputation and building a loyal fan base. They have been on the rise in the local scene recently and are planning to release an EP later on in the year, which has been met with a lot of anticipation.

They masterfully immersed their audience with strong vocals and, while working together in wonderful contrast with the extremely talented guitarists, brought sounds that invited a lot of passionate and contagious dancing in the crowd.

To close the night, Charity Shop Vinyl came on to the stage greeted by cheers and claps. They started with a new song ‘Disco Biscuits’ that had the crowd screaming back the lyrics with amazing energy. It was then they announced they would be giving out prizes for the best dancing and singing in the crowd: A box of Shreddies and a ‘School of Rock’ DVD.

Charity Shop Vinyl blared a wave of pure ecstasy into the room bringing the crowd to jump, dance and sing along in unity. The atmosphere was amazing. Charity Shop Vinyl highlight the talent in the ever growing local scene. The whole town would have heard the uproar of rock and cheers.

Charity Shop Vinyl played through their EP as well as some recently written songs, which they hope will be recorded in the near future. Of course, one of the winners of the prizes had to be a crowd member in a giraffe mask who danced his heart out the whole way through the night. He then joined the band on stage for a dance.

Then the newly released ‘Colourblind’ slowed the room into a sway with a slow but enchanting sound: with it, some heartfelt vocals to match. A powerful and memorable performance that certainly prompted many in attendance to listen to the new EP in full on the way home.

From playing at Stendhal to selling out all their merchandise and a high demand for physical copies of their EP, you can guarantee that they are going straight to the top. We can all expect to see great things in the future from Charity Shop Vinyl.