This writer hasn’t been on the grounds of (what used to be Beechmount Leisure Centre) for nearly twenty years. Strange to think that it’s only five minutes up the road. But this was a gig by The Damned. No excuses.

Oh no, it’s Suckin’ Diesel. A band who mix the melodies of Oi, the dirtiness of crust and the aggression of metal as well as throwing in Belfast “humour.” It doesn’t work. And the band seem to know it as well: they keep their distance from each other and bassist Daryl hardly bothers to sing his backing vocals. Visually, the band are a mess as well: one metaller, one spide, two crusties and a Gary Bushell lookalike on vocals. Previously, this writer had watched their set at Warzone Fest and thought they had made an effort in toning down the “humour” and practising. Tonight, they have reverted back to type.

Having supported The Damned a few times in the past (dating back to The Harp Bar and The Pound), The Outcasts delivered a more relaxed set than normal (owing to them having little to prove), but it was a set that placed more emphasis on the punk pop than the post punk (no ‘Winter’, ‘Programme Love’ etc). Nonetheless, this is a band who clearly relish getting on stage and delivering. Petesy Burns moves around with the determination of someone devoted to the music, while Raymond Falls thumps the toms with a nonchalance not seen since Hugo Burnham (Gang of Four). A cover of Bowie‘s ‘Suffragette City’ is a nod to their roots and reveals the inspiration for ‘Frustration’ (the highlight of their set).

The last time this writer saw The Damned was at Mandela Hall in 2012. Although enjoyable, it suffered from singer Dave Vanian having a cold. Tonight, he’s on top form and the set is a masterclass. Hitting us with ‘Wait For The Blackout’ (the opener from their 1982 album ‘The Black Album’) is an unexpected move. It’s not the most uptempo number, but it’s singalong qualities are a euphoric joy, rejoicing in the night time. ‘Lively Arts’ raises the tempo, and sees guitarist (and all round legend) Captain Sensible come into action. ‘Fan Club’ revels in it’s Alice Cooperisms, and then we get one of the best Damned singles ‘The History of the World.’ A mix of prog and gothic pop, it is beautifully flamboyant and sounds immense live. ‘Stranger On The Town’, ‘Eloise’ (a Barry Ryan cover), ‘Disco Man’, ‘Alone Again Or’ (a cover by cult 60’s act Love), ‘Love Song’, ‘Second Time Around.’ The songs roll out effortlessly. And everyone is a life affirming singalong that either makes you pogo or marvel at the musicianship on display.

‘New Rose’ and ‘Neat Neat Neat’ still pack a mighty punch nearly forty years on. Often ignored by journalists for a variety of reasons, these are singles that are much more important than ‘Anarchy In The UK’ and ‘White Riot.’ There’s no dated political agenda behind them, just youthful enthusiasm and the proof that punk rock and garage are more closely linked than you imagine. Closing with the one two punch of ‘I Feel Alright’ (a cover of ‘1970’ by The Stooges) and ‘Smash It Up’, the Captain shows off his guitar chops while Vanian plays the aloof entertainer to perfection. Throughout the gig, his voice never waivers and sounds as rich and deep as ever.

A beautiful mix of punk, garage, psych, goth and grandiose pop, The Damned are an astonishing live act with depth and diversity as well as the might of punk rock. They continue to be written off by journalists who never understood their humour and ability, but The Damned’s back catalogue stands tall. One of the greatest bands in existence, and they still deliver on the live front. 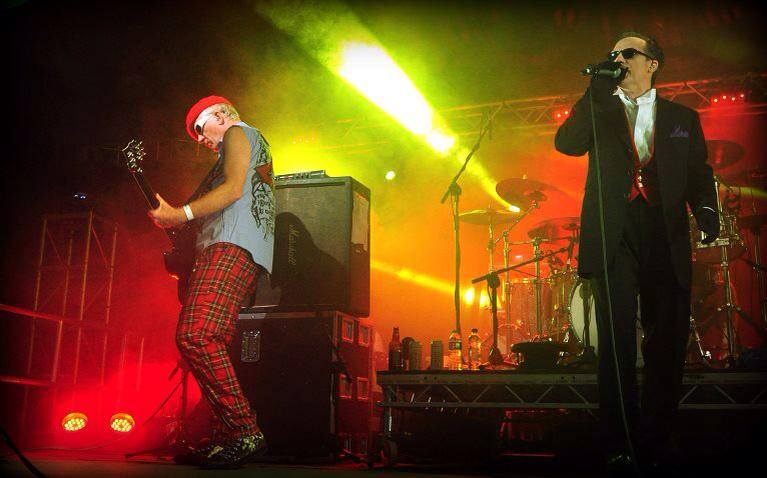