Snow. Whenever you’re a kid, it symbolises magic. You become a teenager, it symbolises loss of innocence. You grow up, and it symbolises a broken neck. It’s also a great way to find out whether your shoes have any grip in them.

Tonight’s gig is the first Belfast gig by Canvey Island’s finest since (at least) 2008. At that time, no one seemed to care about the band, dismissing them as pub rock losers. Since “Oil City Confidential”, they have been riding a wave of renewed interest. There’s just one problem: the current incarnation of this band has no original members. Guitarist Wilko Johnston hasn’t played with them since the mid 70’s, while front man Lee Brilleaux is dead nearly 20 years. Sure, musicians Phil Mitchell, Kevin Morris and Steve Walwyn have been in the band since the 80’s (longer than Wilko’s tenure) but they didn’t appear on any of the classic releases.

This is one of the first time in ages where this writer has gone to a gig with an attitude that can be summed up as “impress me, because I don’t think you’re going to.” Opening with ‘Take a Tip’ (off 1979’s ‘Private Practise’ LP), it quickly becomes clear that any preconceived notions can be thrown out the window, as it is brilliant. Front man Robert Kane’s manic stage presence is reminiscent of Gang of Four front man Jon King. It’s impossible to take your eyes off him. Vocally, he lacks the Howlin Wolf by way of Essex approach of Brilleaux. At times this can irritate (‘Down by the Jetty’ and ‘Milk and Alcohol’ suffer because of this) but on the whole, he does a good job. By not imitating Brilleaux, he puts his own stamp on proceedings. And when it works (‘Down at the Doctors’, ‘Gimme One More Shot’), it works.

Musically, the rest of the band are spot on. While lacking the energy that made them such a hit with proto punks (ask Brian Young from Rudi/Sabrejets about the Feelgood gig in the Whitla Hall in 1976), they perform their roles in the group with the minimum of fuss and the maximum of enthusiasm. The biggest surprise of the night is ‘See You Later Alligator.’ A mid 80’s number, it sounds horrendous on record due to the archetypical 80’s production. Live, it sounds immense and grooves like a bastard. A rendition of R ‘n’ B standard ‘Route 66’ is better than the one recorded by The Rolling Stones.

No original members, but one hell of a show. Come back soon. 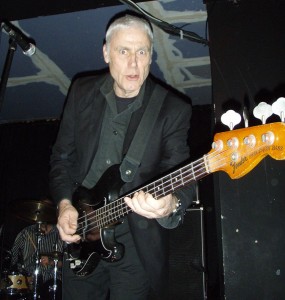 Various – A Split Worse Than Death