The first act up tonight is Empty lungs – usually a four piece band, tonight the punters are treated to an acoustic set from the bands lead Vocalist/Guitarist Kev Jones and Guitarist Sam Chadwick who is also acting as sound technician for tonight’s show. The acoustic set goes down incredibly well with the crowd and it is clear that they have a few of their own fans down tonight. They sing along to ‘Running in Circles’ and ‘Nothing Left to Lose’ – the latter being a song that shows off Kevs’ vocal ability perfectly. The boys draw their set to a close with ‘Stand up’. Sam explains to the crowd “this is a song about having zero pounds in your bank account,” and the venue seems to connect to the sentiment as it is soon filled with cheers and applause. 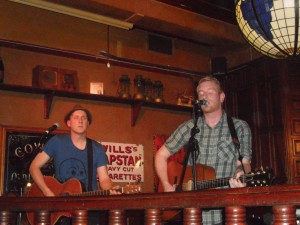 Next up on the stage is Robyn G Shiels, who is making an exception this evening from his usual habit of playing with a full band to perform on his lonesome with just an acoustic guitar for company. Robyn begins to strum his semi acoustic guitar while belting out a soulful yet folk like vocal, mesmerising the punters as they listen and show their appreciation to songs such as ‘Happy Song’ and ‘Black Moon’ – a song that was only finished two days prior to this gig. It receives a fantastic response as the punters sway along to the heartfelt lyrics. Robyn continues to stun the crowd with a cover of ‘I’m On Fire’ as he jokes with the crowd saying ‘I might f**k it up!’ The punters laugh and cheer as Robyn gets stuck into the song putting his own stamp on it. The crowd applaud as Robyn closes his set with a song that has got him a lot of coverage in Sweden and Stockholm – ‘Hello Death’. The song is also a huge favourite among Robyn’s fans here tonight as they chant the words back to him and when he leaves the stage they clamour for more. 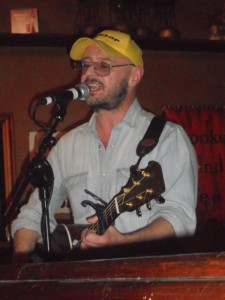 Franz Nicolay repeatedly tells is that this is “the gig that almost didn’t happen” but boy are we glad that it did. The interesting New Yorker takes to the stage dressed almost akin to a 1920’s gangster – this seems to excite the large crowd as he takes to the microphone asking in his strong New York accent, ‘How do you feel about accordion solos?’ A huge roar of cheers fill the room as an excited Franz makes reference to the Katy Daly’s accordion band plaque on the wall as he treats the punters to a solo as many begin to clap along. Instead of naming most of his songs – Franz entertains the crowd by telling stories of his travels, and how each song came from an idea, generally about people he has met, places he has been and other events in his life. Leaving his accordion to rest, (and with franz being the multi-instrumentalist he is) he picks up an acoustic guitar to play his next few travelling inspired songs. Franz begins to tell the punters how he is originally from New Hampshire but considers himself to be a native New Yorker. He then treats us to a song called ‘Live Free or Die’. He then lays down his guitar to pick up his next instrument – a banjo. As Franz walks off the stage, the crowd shout and cheer for more, and thankfully he re-appears to quench our thirst for more. His much anticipated encore features a Jimmy Durante cover and some dubious dancing among the crowd and even on top of the bar… The crowd lap up every second of this eccentric New Yorker’s style. Thanking the crowd, his Father and the support acts for making the show come together; Franz looks as pleased with tonight’s performance as much as the crowd seem to be. Please come back soon Franz! 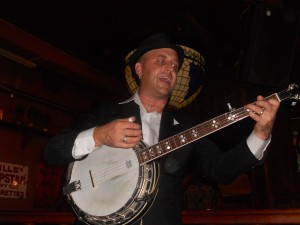